A class action alleges that Natrol’s claims that its Cognium Memory and Cognium Memory Extra Strength supplements help improve memory and recall are false and likely to deceive the public.

A proposed class action alleges Natrol’s claims that its Cognium Memory and Cognium Memory Extra Strength supplements help improve memory and recall are false and likely to deceive the public, in particular given the products have no effect “beyond that of a placebo pill.” 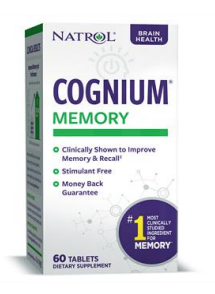 The 17-page case says that despite Natrol’s representations of the Cognium products’ supposed efficacy, the active ingredient in the supplements, silk protein hydrolysate, is no more effective than a placebo at improving memory. The lawsuit contends that although Natrol touts its Cognium supplements as containing the “#1 most clinically studied ingredient for memory,” it is scientifically impossible for silk protein hydrolysate to provide the promised brain health and memory benefits once it is digested in the human gastrointestinal tract.

“Because the Cognium Products are digested they cannot have the effect on brain function claimed beyond that of a placebo pill—in fact, a sugar pill likely has more protein than the Cognium Product, which have [sic] less protein than a slice of bread,” the filing says, alleging consumers have ultimately spent money on a “worthless product.”

According to the complaint, the studies on which Natrol’s Cognium efficacy claims are based are flawed due to issues with their sample sizes. None of the studies cited by Natrol provide any scientific support for the claim that Cognium is “clinically shown to improve memory and recall in healthy adults,” the lawsuit alleges, calling the studies “an attempt to apply a deceiving scientific sheen” onto baseless ad claims. 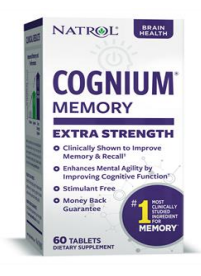 Per the suit, “Cognium” refers to silk protein hydrolysate, and packages of the Natrol supplements state that Cognium Memory is “powered by natural protein from silkworm cocoons.” In addition to claiming that the Cognium supplements are “Clinically Shown to Improve Memory and Recall,” Natrol states on product packaging that the items are for “Brain Health,” and uses the word “Memory” in a large typeface, the case says.

The lawsuit argues that Natrol repeats and reinforces the false and deceptive brain and memory improvement claim on the front and side panels of product packaging. On the side panels, Natrol states that “Cognium Memory keeps your mind sharp and your memory strong,” and that the natural protein from silkworm cocoons has been “shown to be effective in healthy adults in multiple clinical trials,” according to the filing. Product packaging also includes a bar chart purporting to show the results of a “published study” in which Cognium users allegedly experienced increased “memory recall efficiency” in just 21 days, the lawsuit adds.

Despite Natrol’s label claims, the one active ingredient in Cognium, silk protein hydrolysate, is broken down by stomach acid after it is consumed, the suit repeats. The lawsuit, citing an expert witness retained by the plaintiff, states that even if some of the Cognium persists through the digestion process and is absorbed into the blood, a person’s liver would further break it down before the blood-brain barrier would “keep out anything left of the substance.”

“Ultimately, Plaintiff’s expert concludes, Cognium cannot impact the brain because it does not absorb into the blood stream or cross the blood-brain barrier,” the complaint states. “Only if the active ingredient crossed the blood-brain barrier could it potentially cause any improvement whatsoever to brain performance.”

Put another way, the case continues, silk protein hydrolysate, like any other protein, is subjected to digestion in the human gastrointestinal tract, where it is broken down into its amino acid constituent parts. By the time it reaches the bloodstream, it is “no different than any other protein” found in ordinary foods, the suit says.

With regard to the blood-brain barrier, the case relays that the only molecules able to pass through are those under 0.04-0.06 kilodaltons.

“Silk protein hydrolysate does not have a molecular mass that small,” the complaint says.

The lawsuit looks to represent all consumers who bought Cognium Memory or Cognium Memory Extra Strength for personal or household use in California within the applicable statute of limitations period and through the date a class is certified.