A class action challenges the manner in which Rite Aid markets, prices and sells its brand of acetaminophen pain and fever relievers for infants and children.

A proposed class action alleges the manner in which Rite Aid markets, prices and sells its brand of acetaminophen pain and fever relievers for infants and children dupes buyers into paying different prices for essentially the same product.

At the center of the case out of New York are Rite Aid’s Infants’ Fever Reducer & Pain Reliever and Children’s Fever Reducer & Pain Reliever products. Although the two over-the-counter medicines contain “the same exact amount of acetaminophen in the same dosage amounts,” the product marketed for infants is sold at a “substantially higher cost” than its children’s counterpart, the lawsuit alleges.

According to the suit, no reasonable consumer would pay a premium price for an infants’ medication that amounts to “nothing more” than a children’s equivalent unless they were deceived into believing infants cannot safely take children’s products. 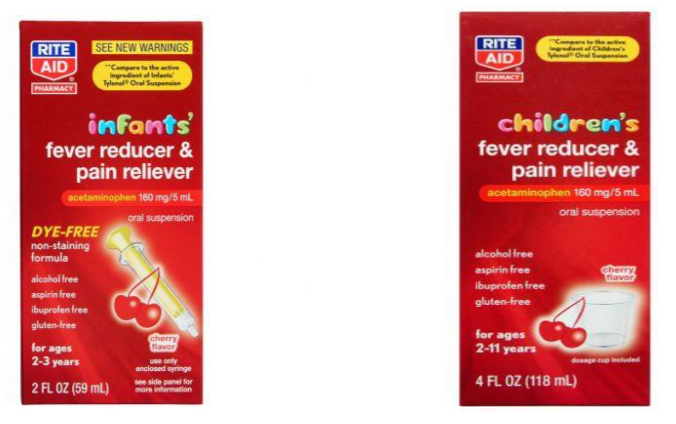 The lawsuit explains acetaminophen, the active ingredient in both Rite Aid pain relievers, has been linked to several child deaths due to mix-ups involving dosage amounts. As a result, the FDA in 2011 informed the public that liquid acetaminophen marketed for infants would thereafter be available only in 160 mg/5 mL concentrations—the same concentration available in products marketed toward children—to avoid accidental toxicity, the case says.

According to the complaint, the potential risk of acetaminophen overdose in children “terrifies” parents and caregivers into taking extra caution when purchasing medication. Rite Aid, the lawsuit alleges, “exploits this fear” by misleading consumers with regard to the age group for which its products are supposedly appropriate.

Echoing a similar case filed this week against Walmart, the lawsuit claims Rite Aid’s advertisements, marketing representations and placement of the Infant’s and Children’s Fever Reducer & Pain Relievers in its brick-and-mortar stores are “misleading, untrue, and likely to deceive reasonable consumers.” The complaint notes the two medications are intentionally packaged with “distinctive and colored lettering” of the words “Infants’” and “Children’s” on the front labels.

Despite the clear distinction between the two products, they contain “the same exact amount of acetaminophen in the same dosage amounts,” the suit asserts, with the only difference being the dosing instrument—a syringe for the infants product and a plastic cup for the children’s product.

The lawsuit alleges that Rite Aid charges approximately three times more for the infant pain reliever product than it does for the children’s product even though the two medications are essentially the same and appropriate for both infants and children with the dosage adjusted based on the weight and age of the child.

Based on the defendant’s representations, however, reasonable consumers such as the plaintiff mistakenly believed the infant pain reliever product was “specifically formulated and designed for infants”—and were therefore willing to pay a premium price for the medication.

The plaintiff, the caretaker of her nine-year-old child and three-year-old granddaughter, looks to represent anyone who purchased Rite Aid’s Infants’ Fever Reducer & Pain Reliever product for personal use in the U.S., with a proposed subclass of those who did so in New York.