Ultimately, the manner in which Walmart advertises, markets and places on store shelves the pediatric over-the-counter fever- and pain-relieving medicines, not to mention how the products are labeled, has allowed the company to sell its Infant’s Pain & Fever acetaminophen for roughly three times more per ounce than its nearly identical children’s product, the 26-page complaint claims.

“No reasonable consumer would pay approximately three times more for Infant’s Products, as compared to Children’s products, unless he or she was deceived into thinking that infants cannot safely take Children’s Products,” the lawsuit says.

The case’s filing comes a little more than a week after Walmart was sued in New York over similar allegations concerning its sale of Parent’s Choice Infant and Toddler Beginnings milk-based powder products.

The suit kicks off by stressing that acetaminophen, the products’ active ingredient, can be dangerous or even fatal if taken in large doses. Accordingly, the risk of an acetaminophen overdose is terrifying to parents and caregivers, who tend to be extra careful when buying over-the-counter medicine for children, the lawsuit says.

Around the turn of the century, parents’ fears were stoked even further due in part to the varying concentrations in which retailers such as Walmart made over-the-counter medicines for infants and children available – and the confusion this could create.

The case says that Walmart’s infant’s medicine, prior to the conduct alleged in the lawsuit, was available only in 80 mg/0.8 mL or 80 mg/mL concentrations while its children’s counterpart was available in 160 mg/5 mL concentrations. After discovering a rash of acetaminophen overdoses among children between 2000 and 2009, the FDA announced in December 2011 that liquid acetaminophen marketed as appropriate for infants would be made available only in 160 mg/5 mL concentrations to prevent confusion regarding dosage amounts and accidental toxicity.

Since then, the only differences in liquid acetaminophen marketed for infants versus children has been the price and dosing instrument included with the product (i.e., Defendant’s Infant’s Products come with a syringe while the Children’s Products come with a plastic cup). The Products have the same 160 milligram concentration of acetaminophen, are interchangeable and therefore suitable for infants and children, adjusting the dosage based only on the weight and age of the child.”


The lawsuit alleges, however, that Walmart exploits this acetaminophen overdose fear among parents and caregivers with the manner in which it sells its basically identical Infant’s & Children’s Pain & Fever medicines. 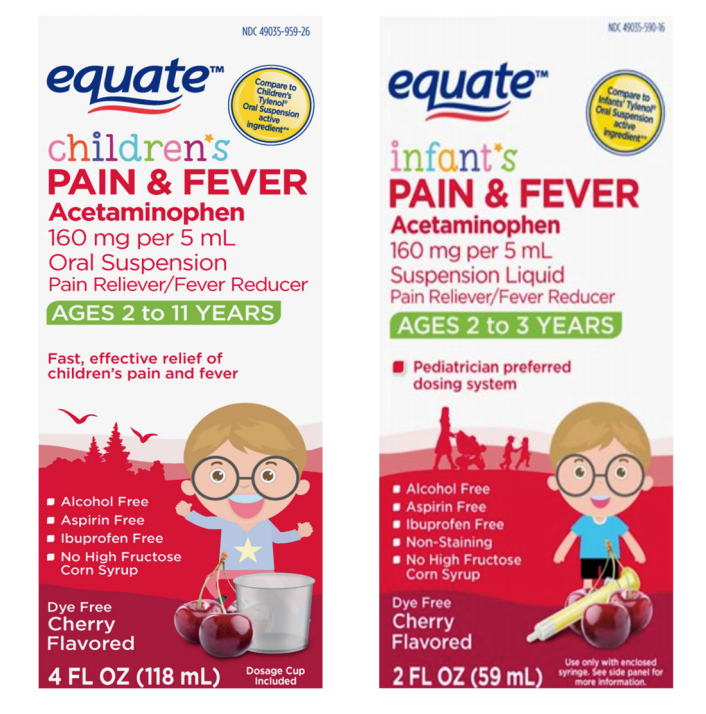 The lawsuit argues Walmart’s distinctive packaging for each product serves to mislead consumers into believing the products are different even though each product contains the exact same amount of the pain-killing ingredient in the same dosage amounts.

More specifically, Walmart wields “deceptive marketing techniques”—including subtle differences in the medicines’ purported age ranges, language concerning the suspension of acetaminophen and an upper right-hand corner badge prompting a comparison to Infant’s and Children’s Tylenol—as a way to obscure from consumers the critical fact that infants can safely take the “significantly cheaper” children’s acetaminophen given the products are “exactly the same,” according to the suit.

“Defendant deceives consumers so that they will buy the deceptively-labeled Infant’s Products for infants, which cost significantly more than Children’s Products, even though the Products contain the same exact amount of acetaminophen in the same dosage amounts,” the lawsuit alleges.

The plaintiff, a San Diego parent of children two, seven and nine years old, claims she bought Walmart’s infant acetaminophen because she believed the product was specifically formulated and designed for infants, due in part to the fact the medicine was labeled differently than its children’s counterpart.

Had the plaintiff known the infant’s acetaminophen was nothing more than the children’s medicine in a different package, she would not have bought, or would have paid much less for, the product, the lawsuit says.


In all, the suit charges Walmart’s infant’s acetaminophen is worth less than what consumers have paid. The complaint says the plaintiff cannot at present buy Walmart’s infant acetaminophen given she remains unsure as to whether the labeling of the product “is, and will be, truthful and non-misleading.”

The lawsuit aims to cover all consumers in the United States who bought Walmart’s Infant’s Pain & Fever acetaminophen medicine for personal use, as well as a California-only subclass.

How do I get in on the lawsuit?

Many consumers are unaware that there’s typically nothing you need to do to be part of or “join” a class action lawsuit. These things almost always take time to work their way through the legal system, usually toward either a settlement or dismissal. For now, all those who have bought Walmart’s infant’s and children’s acetaminophen medicines can do is sit tight.

We’ll update this page with any new developments.