A lawsuit claims certain Purina pet food products represented as being “grain free” are falsely advertised in that they have been found to contain wheat or soy.

A lawsuit claims certain Purina pet food products represented as being “grain free” or containing “[n]o corn, wheat or soy” are falsely advertised in that they have been found to contain “significant amounts” of wheat or soy. 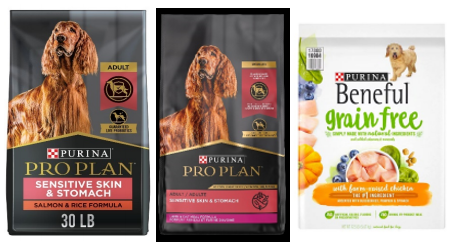 “Plaintiffs and Class Members were damaged because they would not have purchased (or would not have paid a premium) for Defendant’s dog food had they known the true facts regarding the Subject Foods’ ingredients,” the complaint alleges.

The lawsuit explains that because many dogs are allergic to foods containing grains, such as corn, wheat and soy, pet owners are willing to pay a premium for pet food products purporting to be grain-free.

According to the case, the two Purina Pro Plan “Sensitive Skin & Stomach” products are represented as being “easily digestible and gentle on the digestive system” while containing “[n]o corn, wheat or soy.” Similarly, the Beneful “Grain Free” dog food claims to contain “No Corn, Wheat or Gluten,” the case states.

Per the suit, the mislabeling of pet food products “is a well-known and widespread problem.” The complaint cites a number of academic studies in which researchers allegedly found that pet foods “frequently contain[] non-conforming ingredients” and that there are “significant discrepancies” between what’s stated on the products’ labels and their actual ingredients.

The plaintiffs, three dog owners who claim to have purchased the Purina products to benefit their dogs’ health, allegedly found that their pets experienced worsened allergy symptoms or nausea and diarrhea after they began consuming the purportedly limited-ingredient foods.

The plaintiffs look to represent anyone in the U.S. who, during the “maximum period of time permitted by law,” purchased the aforementioned Purina pet food products for personal, family or household purposes and not for resale. The lawsuit also proposes state-specific subclasses for Georgia, Florida and Virginia residents.