The lawsuit detailed on this page was voluntarily dismissed by the plaintiff on July 1 “due to the filling [sic] by Defendant in another court.”

Desert Lake Group appears to have filed for Chapter 11 bankruptcy in April.

Over the past few months, there’s been an influx of lawsuits filed over unwanted text messages from CBD companies and cannabis dispensaries, including the following:

To keep up with the latest class action news and updates, sign up for ClassAction.org’s newsletter here.

Also doing business as First Class Herb Tincture, First Class Herbalist CBD, First Class Herbalist Oils, and USA Herbalist Oils, Desert Lake Group allegedly sent to consumers “thousands” of automated text messages in an attempt to market its CBD (cannabidiol) Gummies. According to the case, the plaintiff received texts from the defendant on November 2 and December 19, 2019 without ever having consented to receive such messages. The plaintiff argues that the “impersonal” nature of the texts he received indicates that the messages were sent through an automatic telephone dialing system, the use of which for non-emergency communication is not permitted absent the recipient’s consent. 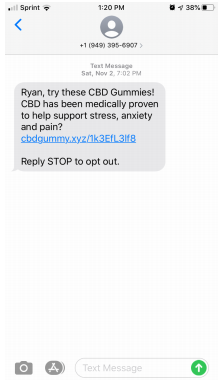 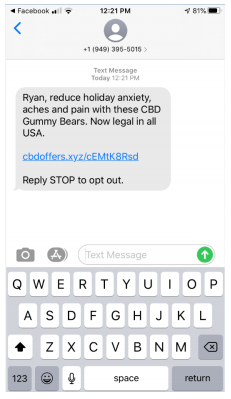 The lawsuit seeks to cover anyone in the U.S. who, within the past four years, received to their cell phone one of the defendant’s text messages sent using an automatic dialing system without the recipient’s prior express written consent.