Let’s start with an example.

Say you work at a restaurant that isn’t paying overtime wages. Your co-worker files a collective action against the restaurant and you decide to opt in, hoping you’ll finally get paid properly. In response, your manager calls everyone into a meeting and hands out a mandatory arbitration agreement that basically says employees are not allowed to file or participate in class or collective actions. The manager threatens to fire you if you don’t sign the new agreement.

According to a recent National Labor Relations Board (NLRB) decision, this is all legal.

Employers are now allowed to update their arbitration agreements in response to workers filing class or collective actions against them, and they can legally threaten to fire those who refuse to sign the new agreements.

Even if you’ve never heard of an arbitration agreement—or one was never forced upon you as a condition of employment—you’ve probably signed one. It may have been tucked into the endless paragraphs of text you quickly scrolled through before clicking the “I have read and understood the Terms and Conditions” box on a website, or perhaps it was buried in the stack of paperwork you signed when you bought your car. Little did you know, you may have signed away your right to sue and could be forced to pursue any disputes through arbitration.

Arbitration is a form of alternative dispute resolution that allows two parties to sort out a disagreement outside of court. In arbitration, a judge and jury are replaced by a third-party arbitrator (or a panel of arbitrators) who will meet with the two parties, hear their arguments, and decide their case.

Though originally designed as a faster and more cost-effective way for commercial entities to resolve disputes between one another, arbitration is becoming an increasingly popular avenue for consumer disputes that companies want to keep out of court.

Arbitration clauses are often included in many types of agreements, including credit card agreements, car purchase contracts, websites’ terms of use, leases, employment contracts, or even when you buy something on Amazon. Check out the “Disputes” section of Amazon.com’s “Conditions of Use”:

Arbitration clauses are often placed in the “fine print” where consumers are less likely to notice what they’re agreeing to, so make sure you read carefully before you sign anything and pay attention to any paperwork that comes with a product or service.

Is arbitration always a bad thing?

Not necessarily. Arbitration has its pros and cons, and in some situations, it could be preferable to taking your matter to court.

Because arbitration doesn’t involve all the formalities of a lawsuit, it’s often quicker and more efficient than arguing your case in court. It can be cheaper, too, since the proceedings usually don’t drag on as long; court cases can go on for months, years, or in extreme cases, decades.

Another consideration is the matter of privacy. Documents filed with the court are generally considered public record, while arbitration proceedings are almost always kept secret. Privacy could be preferable to some individuals, but, as we’ll discuss later, it can also prove to be an unwanted side effect of arbitration.

While arbitration can be a useful option for resolving disputes, it can become a problem when it’s the only option.

One concern critics have with arbitration is when companies make it mandatory—and thereby force consumers to give up their right to sue in court instead of being able to choose between the two.

Arbitration does have some drawbacks that can be harmful to consumers in certain situations.

For one thing, there’s far less oversight and structure to arbitration than there is in court. Companies have the upper hand because they can specify in the arbitration clause how the proceedings will be handled, such as who will pay the fees, how much it will cost you to initiate the process, where the arbitration will take place, and the extent of the discovery process. Depending on the terms, consumers could be at a disadvantage when it comes to having access to the resources they need to help them win their case.

Companies can also reserve the right to choose the arbitrator, which, critics argue, leaves room for bias. Some companies may choose arbitrators who are more likely to rule in their favor, while the arbitrators, for their part, may be tempted to do just that in order to encourage repeat customers.

If this all sounds a little unfair to you, it should be noted that arbitration clauses and rulings can be challenged in court. If the court agrees that the terms were too egregious or the arbitrator was biased, the decision can be overruled.

Though arbitration is sometimes cheaper than filing a lawsuit, it’s not always cheap. Arbitrators often charge hundreds or even thousands of dollars per hour, and if you also have an attorney representing you, the costs can really add up.

One woman says she’s paid at least $185,000 so far to arbitrate her sexual harassment claim against her former employer. In contrast, she notes that she would have paid only $450 to file her claim in court. In addition, according to the Economic Policy Institute, employees are less likely to win a case before an arbitrator than before a judge—and don’t get as big of a payout if they do. Check out the infographic below (but keep in mind that this is just a simple comparison and that there are other factors to consider). 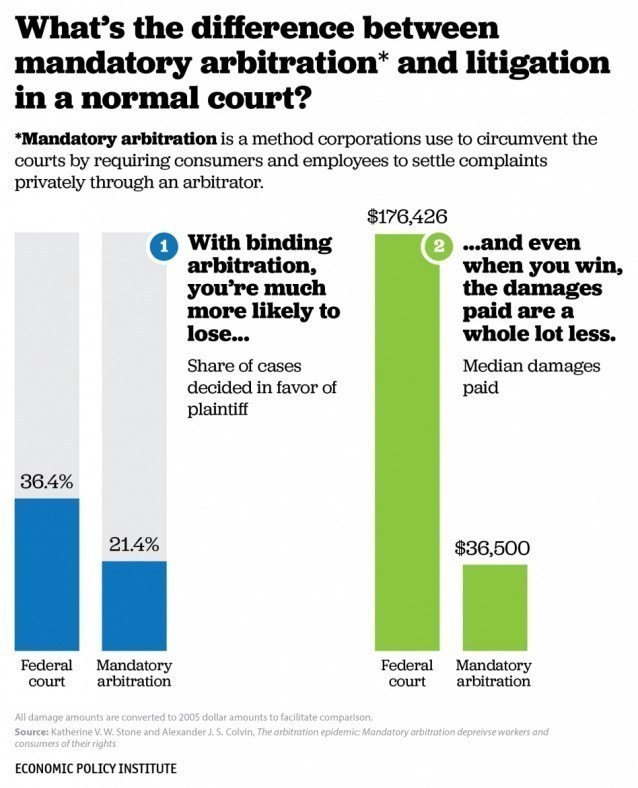 While arbitration’s closed-door operations could be preferable to some people, this type of forced privacy can be harmful when a consumer wants to expose a company’s misbehavior.

Parties to arbitration are often required to sign nondisclosure agreements as part of their settlements, which means they can’t discuss the case or the terms of the settlement in public. This becomes particularly concerning in some cases, such as those involving sexual harassment or discrimination. For example, if an employee who was harassed by a manager is forced to settle the matter in arbitration, the boss could theoretically continue harassing others after the case is settled—and the employee wouldn’t be able to warn them.

The other potential downside to forced arbitration is that the arbitrator’s decision is usually final. In some cases, known as non-binding arbitration, both parties need to approve the settlement before it becomes official. Usually, though, arbitration is binding, meaning the case can’t be appealed—you’ll just have to accept whatever the arbitrator decides.

How do I avoid mandatory arbitration?

It’s tough, but if you’re willing to put up a fight, you may be able to get out of your arbitration agreement or avoid being bound to one.

Take It to Court

A lawyer could help you decide if this is a viable option for you.

Look for Opportunities to Opt Out

Some contracts and agreements will allow you to opt out of mandatory arbitration. Make sure you carefully read your contracts, terms and conditions, or any paperwork that comes with a product or service you purchase—and pay attention to any ongoing communications with the company. There may be a deadline by which you can opt out and instructions on how to do so, but you won’t know unless you read what the company sends you.

You should also carefully consider whether opting out is the best decision for you. Each case is different, and you may want to consult a lawyer before deciding to opt out of arbitration.

If you notice an arbitration clause in an agreement you haven’t signed yet, you can always try to negotiate with the company to see if they’ll agree to remove it, or at least change the terms. If the other party wants your business—or your service—they may be willing to compromise.

If a company won’t budge on its arbitration agreement, you may want to search for alternatives. Perhaps you’ll be able to find another company that offers a similar product or service and won’t make you agree to arbitration.

Just because you’re being forced to sign an arbitration agreement doesn’t mean you can’t speak out against it. Back in February, Google announced that it would end its forced arbitration policy in response to employee protests. Your complaints might make a difference in how a company does business.

If you’re concerned about retaliation from your employer, first check your company’s policy for how to file a grievance. This information can often be found in your employee handbook, or you can ask someone in the human resources department. Your employer can’t legally fire you for following its own internal complaint process.

Is anything else being done about this?

Back in April, a bill was introduced to Congress that seeks to end forced arbitration of “employment, consumer, antitrust, or civil rights disputes.” The legislation, known as the Forced Arbitration Injustice Repeal (FAIR) Act, is the latest version of a bill that has been presented to Congress in many forms over the past decade—but this time it has a lot more support from lawmakers.

Don’t get too excited though. It’s not likely that the FAIR Act will fare well with a conservative-majority Congress.

For now, the best thing you can do is to stay informed and pay close attention to what you’re agreeing to before you sign away your rights. And as always, we’ll do our best to keep you updated.