According to the 18-page complaint, laboratory analysis revealed that the true amount of melatonin in the sleep-aiding supplements, including the Pure Zzzs Melatonin, Pure Zzzs Sleep+ Immune Support, and Pure Zzzs Triple Action varieties, was 150 percent to 164 percent of the amount disclaimed on product labels.

The lawsuit alleges the maker of Vicks Pure Zzzs, the Procter & Gamble Company, has systematically misrepresented how much melatonin, a neurohormone that helps regulate the brain’s circadian rhythm and sleep cycle, is in the over-the-counter supplement, and in turn placed consumers at risk. 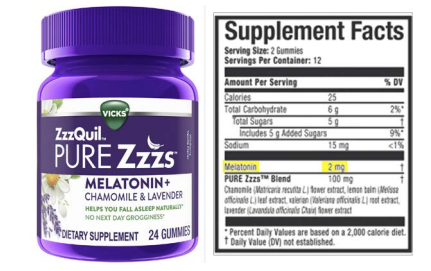 The filing stresses that because melatonin supplements are typically self-prescribed, it is especially important that labels are informative and representative of the product, particularly with regard to the active ingredients. When melatonin is falsely labeled, the case says, lower doses might be ineffective, whereas higher doses could spur unpleasant or unexpected side effects, such as headaches, dizziness, nausea or excessive sleepiness.

“And regardless of side effects, consumers don’t want to take random, uncontrolled amounts of a neurohormone that alters brain chemistry,” the complaint adds.

Per the suit, a 2017 Canadian study found that the amount of melatonin in certain supplements ranged from “-83% to +478%” of the amount stated on labels, and that for more than 70 percent of the brands tested the true amount of melatonin varied by more than 10 percent from the stated amount. The lawsuit says that U.S. scientists warned that the Canadian study “herald[s] what may also be true in the [over-the-counter] melatonin supplements marketed in the United States.”

According to the complaint, liquid chromatography-mass spectrometry analysis (LC-MS) performed on different bottles and types of Vicks Pure Zzzs melatonin supplements showed the products to be “consistently overdosed.” The suit contends that although the Procter & Gamble Company claims that each Pure Zzzs melatonin supplement is made with an optimal amount of the neurohormone, this is not true.

The lawsuit argues that without accurate dosing and labeling, the Zzquil Pure Zzzs melatonin supplements at issue are “worthless.”

The case looks to cover all consumers nationwide who bought any Pure Zzzs melatonin supplement within the applicable statute of limitations period.