A class action claims that certain Samsung electric range stoves are defective in that it’s a little too easy to inadvertently turn on the cooktop’s burners.

A proposed class action claims that certain Samsung electric range stoves are defective in that it’s a little too easy to inadvertently turn on the cooktop’s burners. 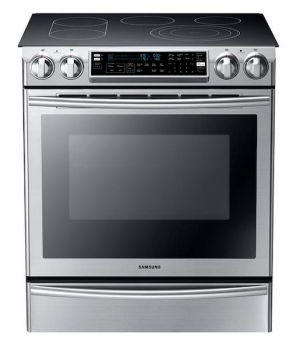 More specifically, the 50-page lawsuit says that the knobs on the Samsung ranges at issue (be sure to scroll down for a list of affected model numbers) rotate easily when they’re touched accidentally, including by pets or children, and can turn on the burners without warning.

According to the case, the defective condition of the Samsung ranges stems from the low detent force, i.e., too little force needed to release the catch that prevents motion, and the short distance the burner control knobs need to travel in order to be placed in the “on” position.

“In other words,” the complaint reads, “the ease with which the knobs can be pushed in and rotated without resistance fails to prevent the cooktop from being turned on inadvertently.”

The propensity of the Samsung ranges to be turned on unintentionally poses “a significant and largely unappreciated safety risk” for consumers and leaves the appliances unsafe for normal and expected use, the filing argues.

The lawsuit alleges defendants Samsung Electronics America and Samsung Electronics Co., Ltd. have known since at least 2014 that the ranges were susceptible to inadvertent activation. Further, Samsung has expressly admitted that the stoves “contain a defective and dangerous condition” by way of maintaining a page on its website dedicated to the issue, the case relays.

Rather than cure the problem, Samsung has instead “elected to conceal it” from consumers by including “misleading information” on the aforementioned webpage, the suit alleges.

“On that page, Samsung falsely claims that, despite the unintentional activation and fire hazard they present, the Range knobs must be designed the way they are to comply with international standards,” the suit states. “Samsung also advises consumers that they can purchase after-market third-party cooktop knob covers or locks to circumvent the inherently defective design of the knobs—again, instead of curing the Defect.”

The case says Samsung has more recently updated the webpage to advise range owners that they can buy replacement knobs from the company, a move the lawsuit calls a brazen attempt to profit from a serious safety hazard the company itself created.

“Because of Samsung’s false and misleading statements, and the company’s concealment of the Defect, Plaintiff and the Class were deceived and deprived of the benefit of their bargain,” the filing alleges. “A range that turns on without a consumer’s knowledge has no value because it cannot be used safely.”

The case looks to cover all United States residents who bought a new Samsung range, or otherwise acquired one, bearing one of the model numbers included above for household use and not for resale.

The plaintiff, a Niagara Falls, New York resident, claims in the suit that she began to notice that her Samsung electric range was being turned on inadvertently in Spring 2021 while contractors were working in her kitchen. In early 2022, the lawsuit says, the plaintiff inadvertently activated the range herself while she was cooking, with the cooktop heating up while the woman had bacon grease cooling on what she thought was an inactive back burner.

Per the suit, the plaintiff did not realize the back burner had been turned on until she “heard bacon grease cracking and saw it splattering all over her kitchen.” In dealing with the situation, the plaintiff suffered a burn to her arm and subsequent scarring, the lawsuit states.

According to the complaint, the plaintiff encountered a similar situation just weeks later, when her range was supposedly activated unintentionally by a guest attempting to obtain a slice of pizza. The plaintiff and her guests began to smell smoke and returned to the kitchen to find that the pizza box had caught fire, the suit says.

The final incident alleged in the case came in early June 2022, when the plaintiff was using a stock pot on her Samsung range to simmer meatballs, ribs, chicken thighs and sausage in homemade spaghetti sauce. The lawsuit says that the plaintiff’s dog, following the scent, attempted to hoist itself up onto the range to see what was cooking and, in doing so, hit one burner knob to “high.” According to the suit, everything the plaintiff was cooking burned, and the pot itself was badly scorched.