A class action alleges PharmaCare U.S.'s sale of Sambucol black elderberry supplements is illegal in that the products are prominently and systematically mislabeled.

A proposed class action alleges PharmaCare U.S.’s sale of its Sambucol line of elderberry supplements is illegal in light of the company’s “prominent and systematic” mislabeling of the products. 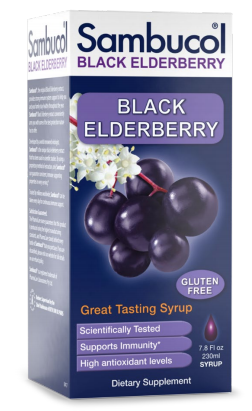 The 53-page lawsuit claims San Diego-based PharmaCare has intentionally marketed and sold a dozen Sambucol-branded elderberry supplements using what amounts to false and misleading labeling and advertising, including representations of the products’ purported ability to help fight off a virus or other illnesses.

Further, the proprietary black elderberry extract used by PharmaCare U.S. does not meet the definition of a dietary ingredient as defined by the federal Food, Drug and Cosmetic Act (FDCA) and has not received FDA approval for use in a dietary supplement as required by the Dietary Supplement Health and Education Act, according to the complaint. All of the defendant’s elderberry supplements that contain the company’s elderberry extract are therefore mislabeled as dietary supplements, the suit charges.

“Defendant warrants that all of the Products contain its proprietary elderberry extract and are legal for consumers to purchase for their personal use and not for resale,” the suit reads. “However, under the Dietary Supplement Health and Education Act (the ‘DSHEA’), Defendant’s products are illegal to sell.”

Among the supposedly “deceptive and misleading” statements relied on by PharmaCare U.S. are claims that Sambucol elderberry supplements are “scientifically tested,” that the company’s proprietary extract has been used in published studies and that the extract is “the most extensively researched Black Elderberry product in the world,” the lawsuit says. According to the complaint, these marketing statements, in addition to providing the defendant with a competitive leg up in a “highly lucrative market,” are meant to and do falsely suggest that scientific research conclusively backs the effectiveness of PharmaCare’s elderberry supplements.

“With knowledge of growing consumer demand for supplements containing elderberry, Defendant has intentionally marketed and sold its illegal Elderberry Products using false and misleading labeling and advertising,” the suit alleges.

The lawsuit claims the following PharmaCare U.S. elderberry products have been falsely and misleadingly advertised:

Dietary supplements are defined by the FDCA as a “product (other than tobacco) intended to supplement the diet” that contains one or more vitamins; minerals; herbs or other botanicals; amino acids; supplements meant to increase total dietary intake; or a concentrate, metabolite, constituent, extract or combination of any of the listed ingredients, the lawsuit says. In 1994, the passing of the DSHEA established new framework to govern the composition, safety, labeling, manufacturing and marketing of dietary supplements, the suit relays. Under the DSHEA, the case continues, only dietary ingredients marketed in the United States prior to 1994 may be used in dietary supplements without first notifying the FDA.

“Defendant’s extract was not marketed as a dietary ingredient in the United States before 1994 and thus does not qualify for this exemption,” the lawsuit claims.

To include a dietary ingredient not used in the U.S. prior to 1994 in a supplement, a manufacturer or distributor must wait at least 75 days before the introduction of the new dietary ingredient (NDI) into the market, as well as provide the FDA with information demonstrating that the “history of use or other evidence of safety” show that the NDI, when used under the conditions specified by the company, will reasonably be expected to be safe, the lawsuit says. After receiving this information, the FDA may then determine that a company has fallen short of providing an adequate basis to conclude that the new dietary ingredient is expected to be safe, which would then prevent the marketing of the ingredient, per the suit.

According to the complaint, PharmaCare U.S. has not checked any of the aforementioned boxes before marketing, advertising and selling its Sambucol elderberry supplements.

“Although required to do so, Defendant did not provide the FDA with the required NDI notification for its extract,” the case alleges, stating that dietary supplements that contain undisclosed new dietary ingredients are considered adulterated for the purposes of the FDCA. “Defendant was fully aware that its extract was an NDI and that its extract had not been used for food in the same chemical form as used in its Products, but nevertheless included it in its Products without notification to the FDA.”

Tackled later in the lawsuit are the defendant’s claims concerning the Sambucol supplements’ purported ability to mitigate or prevent certain diseases and what the case calls the “inadequate” directions for use on each product package. Regarding the former, the lawsuit says the defendant’s claims that the supplements were developed by a “virologist,” were “scientifically tested” and “support immunity” have led reasonable consumers to believe the elderberry products can help prevent, mitigate or cure certain viruses and illnesses. The company’s “implied disease claims,” however, mark the products as misbranded under federal law, the complaint alleges.

Relatedly, the elderberry supplements are misbranded within the meaning of the FDCA in that the law sets strict requirements as far as including directions for use on packaging. From the complaint:

“‘Adequate directions for use’ means directions that enable a layperson to use a drug safely and for the purposes for which it is intended. … The Products are offered for conditions that are not amenable to self-diagnosis and treatment by individuals who are not medical practitioners; therefore, adequate directions for use cannot be written so that a layperson can use these drugs safely for their intended purposes.”

The plaintiffs say they would not have bought the products had they known the supplements were “not legally sold” and marketed with materially misleading representations and omissions.

The lawsuit looks to represent all consumers in the United States who bought any of PharmaCare U.S.’s elderberry supplements for personal use and not resale, as well as California-, Massachusetts- and Missouri-specific subclasses of buyers.