The 25-page suit claims defendant Pete and Gerry’s Organics, LLC, through “boast[s]” about the living conditions in which Nellie’s hens are purportedly raised, has led reasonable consumers to wrongly believe that the hens “had space to move around both indoors and outdoors,” “in fact spent time outdoors” and “have better lives than other hens because they have more access to the outdoors.”

Unfortunately for consumers, the complaint out of New York says, “none of this is accurate.” According to the suit, the defendant’s “portrait” of the hens’ purportedly “Free Range” lifestyle is “far from the reality”:

“Defendant’s hens are crammed into sheds up to 20,000 at a time, preventing them from extending their wings, foraging or making their way to the outdoor space Defendant advertises so prominently.

These conditions are a very far cry from the impression reasonable consumers gain from Defendant’s representations and photographs on the Eggs’ packaging.”

Included in the complaint are a number of photos purporting to show the conditions in which Pete and Gerry’s hens live. The lawsuit says that although the defendant’s website and product packaging are rife with representations that its hens come from “small farms” and are given “room to stretch,” among other claims, the overcrowded conditions and limited hatch openings to the outside prevent Pete and Gerry’s purportedly “free range” hens from living as the company advertises: 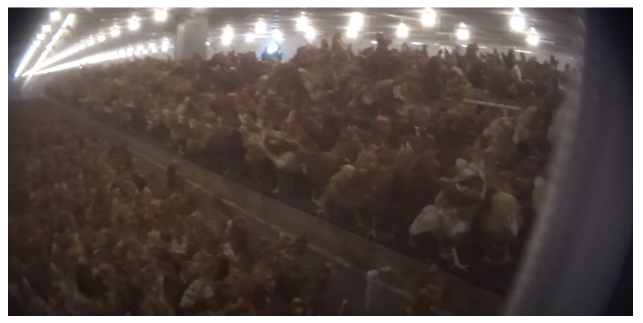 As the lawsuit tells it, the conditions in the defendant’s henhouses are “virtually indistinguishable” from those used by Pete and Gerry’s as an example of the opposite of “free range.” Per the suit, Nellie’s itself “describes this as a ‘grim existence’ for these hens,” yet “that is precisely how Nellie’s own hens live,” according to the complaint.

In truth, the harshness of the living conditions for Nellie’s hens is exacerbated by the fact that they can only get outside through “small hatches cut at intervals along the sides of the shed” in which they’re housed, the suit claims. Per the case, these hatches are closed all winter and during inclement weather and, in pleasant weather, closed at night until 1:00 p.m. the next day.

The lawsuit goes on to highlight what it calls the “disconnect” between the defendant’s representations about Nellie’s eggs and reality by describing the reactions of Brooklyn Whole Foods shoppers who bought the product. The consumers, the suit says, were asked if they looked for “free range” eggs before being shown “video of the actual conditions on Nellie’s farms” and asked for their thoughts. According to the complaint, all of the consumers, after watching the videos, said they would not buy the product again.