General Motors faces a class action that alleges the lithium ion battery in the Chevy Bolt can spontaneously catch fire due to a defect.

The lithium ion batteries in 2017-2019 model year Chevrolet Bolt vehicles suffer from an energy management defect that can cause them to spontaneously ignite when fully or near fully charged, a proposed class action claims. “Significantly, the documented fires in the Chevrolet Bolt vehicles has [sic] not been the result of external abuse, but rather, has resulted from an internal failure while the cars are parked,” the complaint says. “This type of spontaneous ignition caused by thermal runaway has been reported to cause as much as 80% of lithium ion battery fires.”

The suit’s November 29 filing comes less than a month after 50,000 2017-2019 Chevy Bolt EVs were recalled. With the announcement, GM urged drivers to park the vehicles outside and away from houses until repairs could be done. The National Highway Traffic Safety Administration (NHTSA) has launched an inquiry into nearly 78,000 Chevy Bolt models over driver complaints that a fire can start under the rear seating area. 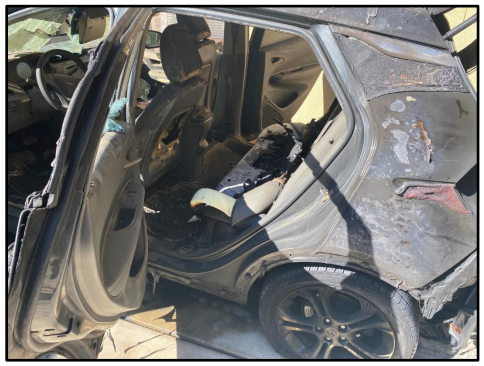 Per the case, the automaker has known of the Chevy Bolt battery issues since at least early 2018 given it issued in April of that year, and again in May, notice to drivers to install a software update meant to provide greater warning about any potential “cell low-voltage condition” and loss of propulsion.

Among the suit’s five plaintiffs are a mother and her minor daughter who the lawsuit says suffered injuries as a result of the failure of the Chevy Bolt’s battery in Summer 2020. The case includes pictures purporting to show that the plaintiff’s vehicle caught fire and caused extensive damage to her home, as well as physical and emotional harm.

In 2017, GM introduced the plug-in, all-electric Chevy Bolt in an effort to compete in the emerging all-electric vehicle market alongside Tesla, Nissan and BMW, the complaint begins. Upon its release, the Bolt was “a critics’ darling,” according to the suit, winning the 2017 Motor Trend Car of the Year and the North American Car of the Year awards, accolades earned on the back of GM’s claims that it had designed and manufactured a battery that boosted the car’s range on a single charge, per the case.

From there, the lawsuit emphasizes that the marketing of an electric vehicle’s battery range, in particular an increase of such, is critical in that an electric car’s usefulness is tied directly to the distance it can travel before needing a recharge. As such, buyers come to rely heavily on an automaker’s representations with regard to an electric car’s ability to travel on a single charge, and strongly consider price and range when deciding to buy an electric vehicle, the suit reads.

When GM began selling the Chevy Bolt, the vehicle was represented to have a travel range of 238 miles without needing a recharge, the case says, noting that the Bolt’s range was front and center in the defendant’s national advertising campaign for the car. In the time since, however, concerns over the safety of the Bolt’s lithium ion batteries have apparently taken center stage.

According to the lawsuit, the safety concerns surrounding lithium ion batteries have been “well documented” despite their high specific energy and power and long life cycle. Per the case, these concerns were known to GM, due in particular to noted battery fires over the years with the Chevy Volt and Tesla Model S.

Though lithium ion battery fires are especially dangerous given they pose what the case describes as hazards that go beyond an ordinary fire in terms of initiation, spread, duration, toxicity and extinction, the alleged Chevy Bolt battery fires stand apart in that they’ve resulted from internal failure—i.e. thermal runaway—while a vehicle is parked, the lawsuit says:

“This type of spontaneous ignition caused by thermal runaway has been reported to cause as much as 80% of lithium ion battery fires.”

As the lawsuit tells it, GM pushed the Chevy Bolt to market and the car’s battery beyond its capabilities despite NHTSA warnings that overcharging a lithium ion battery can spark one of several exothermic reactions that may initiate thermal runaway, a condition to which batteries without temperature controls are prone, and cause spontaneous ignition.

According to the complaint, the NHTSA says proper management of the electrical loads among the cells in a battery pack helps maintain overall charge and discharge performance within an acceptable range and prevent over discharge or overcharge conditions. As temperature is a key measurement of cell electrical performance—hotter cells may discharge or charge more quickly than colder cells, for instance—thermal management must be a top consideration when designing a car’s battery system in order to mitigate potentially problematic conditions, the case states.

With that informational runway laid, the plaintiffs allege the lithium ion batteries and their related management systems in the Chevy Bolt are defective and unsafe given they are inadequate at preventing thermal runaway and spontaneous ignition.

As it became “harder and harder for GM to hide the Battery Defect from the general public,” the suit says, the automaker, after receiving at least four claims that the Bolt’s battery pack was to blame for fires, announced in November a recall of more than 50,000 vehicles equipped with design-level N2.1 batteries made at LG Chem’s plant in Ochang, Korea.

“GM had concluded through its own investigation that the battery pack posed a risk of fire when charged to full, or very close to full, capacity,” per the suit.

The lawsuit claims, though, that GM did not issue the recall to replace the “unreasonably dangerous” N2.1 batteries but rather to install an interim software fix that the case says “calls for reprogramming the hybrid propulsion system control module to limit the battery’s range” to roughly 214 miles on a single charge, dropping the advertised Bolt battery range by approximately 10 percent. Further, GM has recommended that drivers, prior to taking their Bolts in for reprogramming, enable settings called “Hilltop Reserve” or “Target Charge Level” modes, which limit a battery’s charge to 90 percent, the lawsuit says.

Notwithstanding GM’s knowledge of the Bolt battery defect, the automaker failed to notify drivers of the issues and other associated hazards at the time they bought or leased their vehicles, the lawsuit alleges. The complaint slams GM for choosing to initiate a recall only after several fires were reported, a delay the plaintiffs allege aimed to “avoid the financial fallout from having to acknowledge that the Class Vehicles and its batteries were simply incapable of safety providing customers with GM’s long advertised 238 mile driving range.”

“Had Plaintiffs and other Class members known at the time of purchase or lease of the true range of the Class Vehicles and the propensity of the batteries installed in the Class Vehicles’ to burst into flame, they would not have bought or leased the Class Vehicles, or would have paid substantially less for them,” the lawsuit reads.