A class action alleges the marketing and advertising for certain Hawaiian Tropic “Reef Friendly” sunscreens is false and deceptive.

A proposed class action alleges the marketing and advertising for certain Hawaiian Tropic “Reef Friendly” sunscreens is false and deceptive in that the products contain chemicals known to harm and/or kill coral reefs. The 22-page complaint alleges Hawaiian Tropic “Reef Friendly” sunscreens, made and sold by defendant Edgewell Personal Care, contain reef-toxic compounds such as avobenzone, homosalate and octocrylene, chemical UV filters that can cause coral bleaching and other damaging effects should they wash off the skin and enter a body of water.

According to the case, consumers would not have bought Hawaiian Tropic “Reef Friendly” sunscreens, or would not have paid as much for them, had they known they contained chemicals potentially harmful to coral reefs.

Octocrylene is a chemical UV filter that the Haereticus Environmental Laboratory (HEL), a non-profit organization dedicated to “increasing the scientific, social, and economic knowledge of natural habitats,” has reported naturally degrades into the chemical benzophenone, the lawsuit says. Per the case, benzophenone acts as a potential reproductive toxicant and a metabolic and endocrine disrupter in coral reefs.

The National Ocean Service has also advocated against the use of chemical UV filters such as octocrylene given their negative impact on coral reefs, which can include tissue accumulation, bleaching, DNA damage, deformation of infant coral, and coral death, according to the lawsuit.

With regard to avobenzone and homosalate, the filing says the former may cause mitochondrial dysfunction, kill cells or induce coral bleaching, while the latter is also included in the HEL’s list of harmful chemicals.

Included in the complaint is the following infographic from the National Oceanic and Atmospheric Administration purporting to depict how chemicals found in sunscreen can be harmful to marine life: 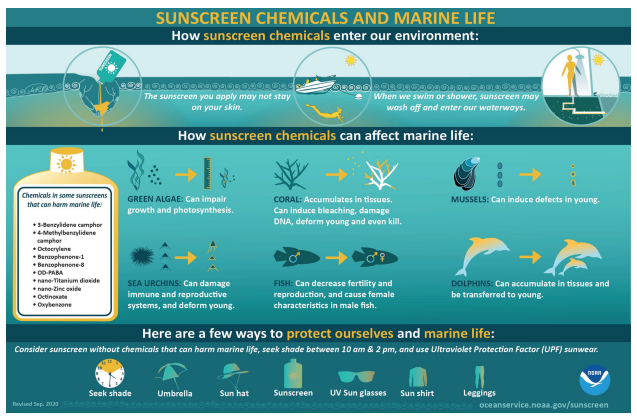 According to the lawsuit, lawmakers in Hawaii and the U.S. Virgin Islands have banned certain chemical UV filters from inclusion in sunscreen due to the damage they can cause to coral reefs and marine life.

Nowhere on Hawaiian Tropic’s packaging does Edgewell Personal Care disclose that certain chemicals in the sunscreens are not “reef friendly,” the suit says, adding that the company knew or should have known its advertising claims were false, deceptive and misleading.