A proposed class action alleges General Motors has failed to disclose to the public a defect plaguing the positive crank ventilation (PCV) system in certain Buick, Chevrolet and GMC vehicles equipped with the automaker’s 2.4L engine.

The 164-page complaint says the apparent defect, which can affect the components that regulate the amount of air and gas that are pumped through an engine, can lead to “disastrous consequences” in affected vehicles. According to the case, if a vehicle’s PCV system becomes plugged, it can increase the pressure in an engine and cause the car’s rear main seal to rupture, leading to catastrophic oil loss, loss of power to the vehicle and permanent, costly engine damage.

The lawsuit relays that GM acknowledged the PCV system clogging defect in February 2019, when it issued to dealers, but not to drivers, a “diagnostic tip” bulletin that explained the propensity of the system to become clogged in cold weather. General Motors declined to recall affected vehicles or extend drivers’ warranties, and merely advised technicians to use a drill bit to clean out the clogged orifice (indicated with a red arrow), the case states. 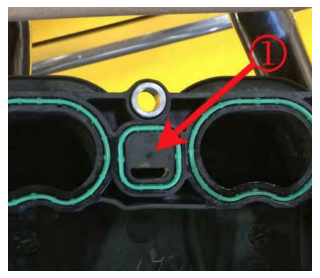 According to the lawsuit, GM has known “since at least 1985” of the PCV system’s vulnerability to cold weather and clogging.

“Despite this track record, GM continues to conceal this defect from consumers at the point of sale, and continues to design, manufacture, distribute and sell hundreds of thousands of vehicles prone to this defect,” the filing alleges.

The vehicle models allegedly afflicted by the PCV system problem include, according to the suit:

The filing stresses that in addition to being dangerous, the GM PCV system issue can necessitate “extremely expensive” repairs not covered under warranty. One of the suit’s seven plaintiffs, for example, paid upward of $7,000 out-of-pocket for a total engine replacement, while another was quoted between $4,500 and $5,000 for repairs, the suit relays.

According to the filing, a vehicle’s PCV system is responsible for removing “blow-by” gases from the crankcase—the housing for the crankshaft through which a mix of fuel and air passes before entering an engine’s cylinders—of a vehicle’s internal combustion engine. The system usually consists of a valve and a vacuum in the intake manifold tube that sucks the PCV valve open, per the case. By diverting the blow-by gases, a PCV valve reduces the vacuum effect in the crankcase, preventing damage to engine seals, the complaint says.

If a PCV system becomes plugged up, it cannot draw moisture and vapors from the crankcase, and can cause an increase in pressure that could force oil to leak through the engine seals, according to the suit.

In the vehicle models listed on this page, the small fixed-orifice design of the PCV system is prone to becoming plugged up from ice, sludge and water during cold weather, which can cause an increase in pressure and eventually the blowout of the rear main engine seal, the lawsuit alleges.

The lawsuit looks to represent all persons and entities who bought or leased one or more of the Buick, Chevy or GMC vehicle models listed on this page from a GM dealer.