A class action alleges the three-percent hydrogen peroxide solution sold by CVS Health is not appropriate for treating minor cuts and abrasions as advertised.

A proposed class action alleges the three-percent hydrogen peroxide solution sold by CVS Health is not appropriate for treating minor cuts and abrasions as advertised. 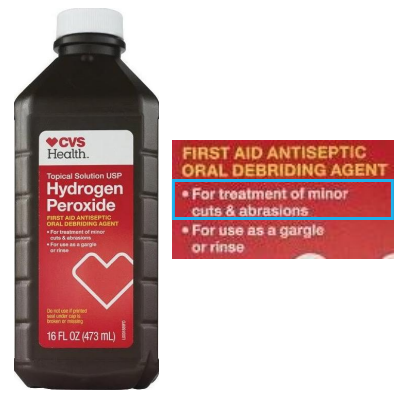 More specifically, the 14-page lawsuit says that defendant CVS Pharmacy, Inc. is not authorized to claim that the hydrogen peroxide can be used for the “treatment of minor cuts and abrasions” since the product’s caustic properties “negatively [affect] healthy cells involved in wound healing.”

Per the complaint, the claim that the hydrogen peroxide is for the “treatment of minor cuts and abrasions” informs buyers that the product will aid in the healing process and shorten healing time, when this statement is “false, misleading, and not authorized by any applicable body.”

The suit charges that the value of CVS Health three-percent hydrogen peroxide is “materially less” than its value as represented by the retailer, who sold the product at higher prices as a result of the allegedly deceptive labeling.

“Reasonable consumers must and do rely on a company to honestly and lawfully market and describe the components, attributes, and features of a product, relative to itself and other comparable products or alternatives,” the case reads.

According to the lawsuit, the authorized claim that the product can be used “[as] first aid to help prevent the risk of infection in minor cuts, scrapes and burns” is distinct from the “unauthorized” claim that it can be used for the treatment of minor cuts and abrasions.

A key contention in the case is CVS’s use of the word “treatment,” which the complaint defines as an attempt to heal, improve or cure a condition.

“Plaintiff would not have purchased the Product if he knew the representations and omissions with respect to its use for treatment of minor cuts and abrasions were false and misleading or would have paid less for it,” the filing states.