A class action claims Dollar General has charged different prices for infant’s and children’s DG-brand pain relievers even though the products are “exactly the same.”

The official settlement website for the Dollar General infant acetaminophen class action is live and can be found here:

The settlement covers consumers who bought DG Health Infants’ Acetaminophen at any time between September 15, 2016 and June 8, 2021. Those who submit claims with proof of purchase can receive a partial refund of $1.70 for every 1 fl. oz. and 2 fl. oz. bottle of infants’ acetaminophen that they bought without limitation. Class members who submit claims without proof of purchase will be entitled to a partial refund of $1.70 for up to a maximum of three 1 fl. oz. or 2 fl. oz. bottles, i.e. a total of $5.10 per household. Only one claim may be submitted per household.

To file a claim, head on over to this page.

The deadline for filing a claim with the settlement is August 27, 2021. If you do not submit a claim, you will receive no payment.

In addition to the $1.8 million settlement, Dollar General has agreed to modify the language on the labeling/packaging of its infants’ acetaminophen product.

Answers to frequently asked questions can be found here, and the settlement administrator can be contacted here.

Dollar General has agreed this week to a $1.8 million settlement of the claims detailed on this page.

According to the motion for preliminary approval of the settlement, consumers in the U.S. who purchased DG Health Infants’ Acetaminophen anytime between September 15, 2016 and the date notice to the class is first published can submit claims to be reimbursed for $1.70 per product. There’s no maximum to the number of claims that can be submitted with proof of purchase, but the limit is $5.10 (or three products) per household without proof of purchase.

Aside from monetary relief, Dollar General has also agreed not to sell the infants’ acetaminophen unless the label clearly states that the medicine contains the same concentration of liquid acetaminophen as the DG Health Children’s acetaminophen product, or contains another similar statement.

If the court grants the settlement preliminary approval, notice will be sent to those covered by the settlement and a website will be set up to inform people about the lawsuit and allow claims to be submitted online.

Stay tuned for a link to the settlement website.

A proposed class action claims Dollar General has charged different prices for infant’s and children’s DG-brand over-the-counter pain relievers even though the products are “exactly the same.” 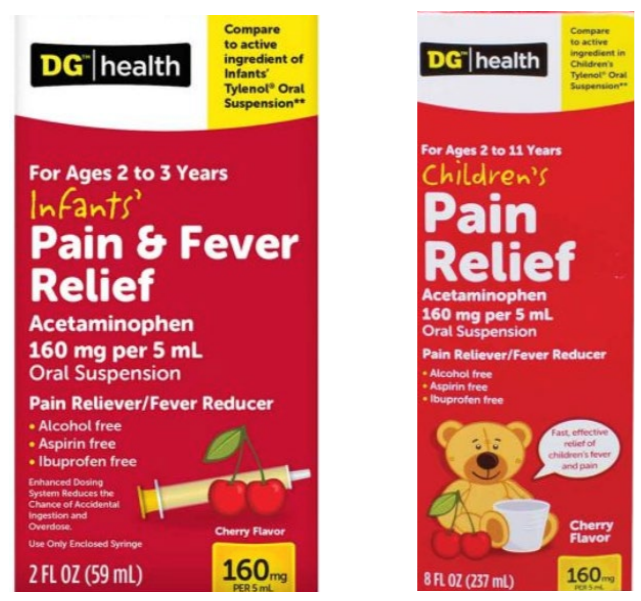 In truth, even though the infants’ medication costs roughly three times more per ounce than its children’s counterpart, the two products contain “the same exact amount of acetaminophen in the same dosage amounts,” the lawsuit claims.

“No reasonable consumer would pay approximately three times more for Infants’ Products, as compared to Children’s Products, unless he or she was deceived into thinking that infants cannot safely take the Children’s Products,” the complaint, filed in Florida federal court, avers.

Echoing similar suits filed this year over infants’ and children’s pain medication sold by Walmart and Rite Aid, the lawsuit relays the FDA informed the public in December 2011 that acetaminophen marketed for infants would now be available in only 160 mg/5 mL concentrations due to reports of at least three children who died from accidental mix-ups of children’s and infants’ pain relievers.

From then on, the suit says, the only difference between liquid acetaminophen marketed for children and versions positioned for use by infants has been the price and dosing instrument included with the product—i.e., a syringe for infants or a plastic cup for children.

Because both medications contain the same 160-milligram concentration, they are thus interchangeable and can be taken by both infants and children so long as the dosage in adjusted based on the child’s weight and age, the lawsuit says.

As the case tells it, Dollar General has attempted to exploit parents’ and caregivers’ accidental overdose fears by using “deceptive marketing techniques” that obscure the fact that the two medicines are “exactly the same.”

“Defendant deceives consumers so that they will buy the deceptively-labeled Infants’ Products for infants, which cost significantly more than the Children’s Products, even though the Products actually contain the same amount of acetaminophen in the same dosage amounts,” the case contends.

The plaintiff, who purchased the Dollar General’s Infants’ Pain & Fever acetaminophen for his children and then grandchildren, says he would never have bought the product, or would have paid less for it, had he known the medicine was “no different” from the Children’s Pain & Fever Acetaminophen: