A class action claims Health-Ade kombucha and kombucha-inspired beverages are not as healthy as represented given they contain a “high amount” of added sugar.

A proposed class action claims Health-Ade kombucha and kombucha-inspired beverages are not as healthy as represented given they contain a “high amount” of added sugar. 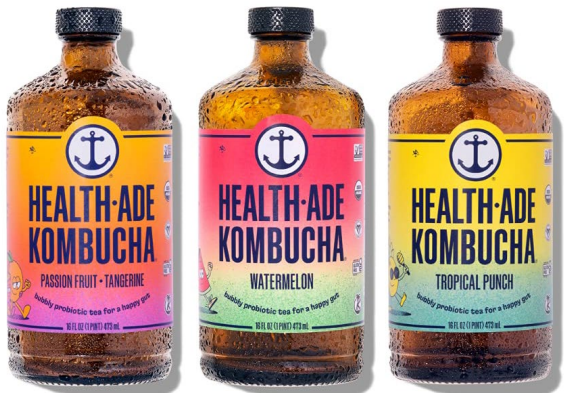 The 37-page lawsuit alleges defendant Health-Ade LLC has falsely and misleadingly represented that certain products, including Health-Ade Kombucha, Health-Ade Plus, Health-Ade Booch Pop, Health-Ade pop and Health-Ade Mixers, will benefit consumers’ health while failing to disclose that the beverages’ high sugar content could contribute to the risk of metabolic disease, cardiovascular disease, type 2 diabetes, liver disease and even all-cause mortality.

According to the lawsuit, the defendant is “well aware” that consumers prefer and are willing to pay more for foods marketed as healthy. Labeling and branding its products as “Health-Ade,” which the suit says expressly conveys that the drinks will aid consumers’ health, has helped the company’s line of kombucha products become the fastest-selling in the U.S., the case claims.

The lawsuit alleges, however, that the defendant’s kombucha—a drink produced by fermenting tea with a yeast and bacteria culture—and kombucha-inspired products are not as healthy as consumers are led to believe given their high sugar content. Per the complaint, the sugar in Health-Ade drinks comprises anywhere from 50 to 91 percent of their total calories.

“Instead of receiving products that had actual healthful qualities, the Health-Ade Beverages that Plaintiffs and the Class received were beverages of the type that are likely to lead to increased risk of disease when consumed regularly,” the complaint says, claiming that the drinks were worth less than consumers paid for them.

The filing cites a plethora of scientific studies and evidence demonstrating that the consumption of sugar-sweetened beverages such as the Health-Ade products is unhealthy and linked to a risk of metabolic disease, cardiovascular heart disease, type 2 diabetes, liver disease, obesity, high blood triglycerides, abnormal cholesterol levels, hypertension, poor gut health and all-cause mortality.

Given the health risks associated with consuming sugar-sweetened beverages, the defendant’s representations of its Health-Ade products as healthy are “false, or at least highly misleading,” the lawsuit alleges. Moreover, even if the pro- or pre-biotics in the Health-Ade products can provide some benefit to consumers’ gut health, regular consumption of the beverages is “likely to detriment overall health,” the suit charges, claiming the Health-Ade representations are “still deceptive.”

Per the case, consumers, most of whom are “unaware of the extent to which consuming high amounts of free or added sugar adversely affects” their health, have been harmed by the Health-Ade representations in that they would not have purchased the products, or would have paid less for them, had they known the drinks were not as healthy as represented.

The lawsuit looks to represent anyone in the U.S. who, within the last four years and until a class is notified, purchased any of the Health-Ade products for personal or household use and not for resale or distribution.