Summer may almost be over, but you still might want to think twice before wearing your Apple Watch SE into the pool or ocean.

Although the tech giant advertises the Apple Watch SE as water resistant up to 50 meters, i.e., good for shallow-water activities, the standard by which the device’s “swimproofness” is tested “is not intended for smart watches, does not apply to real world use conditions of smart watches, and is not understood by most consumers,” the 21-page lawsuit says.

Indeed, a support article on Apple’s website suggests that the Apple Watch SE may not be as water resistant as consumers were led to believe, in particular because the device’s crucial seals and acoustic membranes, which need to be in tip-top shape for the watch to stay “swimproof,” can be damaged over time by soaps, shampoos, conditioners, lotions, sunscreens, body oils and water itself, the complaint says. 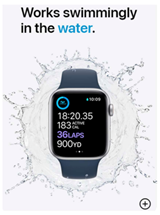 Ultimately, Apple concedes that the Apple Watch SE’s water resistance is not permanent and may diminish over the life of the device, a stark one-eighty from how the product is advertised, the suit relays.

The case, for instance, claims that an Apple Watch SE “suffers frequent damage” after being dropped into or coming into contact with water “for a few minutes or even seconds,” and the company “refuses” to repair or replace water-damaged devices under warranty.

“This means buyers are told one thing when they buy the Product … but something else when they need after-sales service or replacement,” the case, filed on August 25 in California federal court, claims.

“Water resistant” and “waterproof” are not the same thing, case says

With the advent of smart watches, consumers have become “increasingly concerned” about protecting their pricey devices from water damage, the case explains. In fact, an important consideration for a consumer shopping for a smart watch – in addition to battery life and a shatterproof screen – is whether it can resist water damage, especially given the cost of repairing or replacing a device that’s been damaged or destroyed by liquid, the suit relays.

It's with this in mind that Apple markets the Apple Watch SE as having a water resistance rating of “WR50.” Per the complaint, the WR50 rating, under International Organization for Standardization (IOS) standard 22810:2010, means that the device can withstand water up to “50 meters/5 atmospheres/5 bars of pressure/165 feet.”

Apple makes clear by including the WR50 water resistance rating in its advertising that the watch is fine to use while swimming or showering, the filing says.

The case specifies that a product is “water resistant” if it can “resist the penetration of water to some degree,” while one is “waterproof” if it is “completely impervious to water.” The lawsuit contends that although “water resistant” and “waterproof” are two different things, the marketing word “swimproof” is understood by reasonable consumers to mean “waterproof” and that the enclosure of the Apple Watch SE is thus “completely impervious to water.”

Since only a hermetically sealed product can be truly “waterproof,” however, the ISO 22810:2010 standard has replaced the term with “water resistant” to “avoid disputes and ambiguities for watches,” the case says.

Nevertheless, Apple, the complaint alleges, “takes advantage of reasonable consumers’ inability to distinguish between the two terms” by wielding “water-resistant” amid “a backdrop of visuals and statements that imply the Product is waterproof.”

Crucially, the lawsuit contests, the testing method used to provide the Apple Watch SE’s water resistance rating fails to account for how the devices are actually used by the public. For instance, tests performed according to ISO standards are done when the smart watches are brand new, “a condition that will almost never be met in the real world” since a user will most certainly “not have their smart watch subject to potential water damage immediately after they open it,” the suit says. Likewise, in “real-world conditions,” the case says, an Apple Watch SE will likely not be “immersed in purified, fresh water.”

Over time, the device will come into contact with body oils, cosmetics, sunscreen and water, all of which contain agents that gradually corrode and wear out vital parts, seals, coatings, foams and adhesives, the complaint relays.

Further, the filing says that the Apple Watch SE’s water protection barriers, such as coatings, glues, gaskets, meshes and membranes, are porous, meaning they only “deter” water from entering the device. According to the suit, these barriers “degrade and fail,” especially when the watch encounters different temperatures, pressures and “mechanical force conditions.”

With regard to temperature, the case states that the ISO’s general testing conditions rest between 64.4 and 77 degrees Fahrenheit, despite the fact that temperatures in pools, sinks and bathtubs – where the watches might be worn – “typically exceed[] the suggested temperature range under the ISO standard.”

Further still, the ISO standard relied upon by Apple does not specify whether a sample watch is turned on while tested, even though this can affect a device’s ability to withstand water, the lawsuit says.

If the smart watch is on and running various programs, the internal temperature and pressure will be elevated, and the electrical bias can accelerate electromigration.

These factors may affect the depth and duration of water contact the smart watch can withstand.”

Lastly, the filing contends that the “acceptance criteria” for the ISO water resistance tests are vague in that they require only that water entering a device not affect its usual operation or impair its safety, meaning something may be considered “water resistant” as long as it does not short circuit.

The case looks to represent all United States residents who bought an Apple Watch SE for personal or household use at any time between August 25, 2018 and the time the lawsuit is resolved.

I own an Apple Watch SE. How do I join the case?

The thing is, you don’t need to do anything to “join” or have yourself “included” in a proposed class action, at least not when it’s initially filed. These types of lawsuits tend to take some time to work through the legal process, and it’s usually only when and if a suit settles that consumers covered by the case, known as “class members,” would need to act. This usually involves filling out and filing a claim form online or by mail.

But patience, as they say, is a virtue, and it’s important to keep in mind that these types of lawsuits generally take some time to work through the legal process, usually toward a settlement, dismissal or arbitration.

If you own an Apple Watch SE, or just want to stay in the loop on class action lawsuit and settlement news, sign up for ClassAction.org’s free weekly newsletter.