A proposed class action challenges the "Vanilla" claim on the packages of ShopRite’s Wholesome Pantry brand of unsweetened “Vanilla” Almondmilk.

A proposed class action claims the packaging of ShopRite’s Wholesome Pantry brand of unsweetened “Vanilla” Almondmilk fails to disclose that the product is predominantly flavored with “fake, artificial vanilla” and contains only a trace amount of vanilla sourced from vanilla beans. 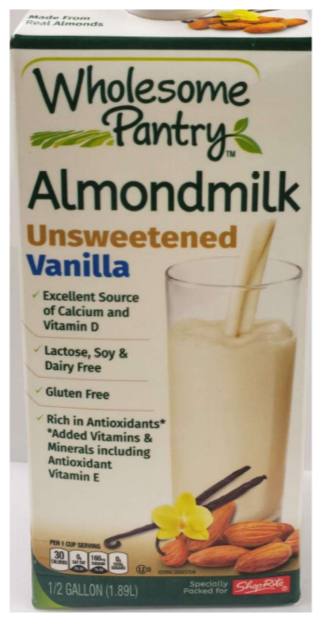 According to the case, consumers have been misled by defendant Wakefern Food Corp.’s packaging and labeling in that they expect the almond milk to be flavored “exclusively and/or predominantly” with vanilla beans and taste like vanilla.

“Unfortunately for consumers, the Product is not flavored mainly from vanilla beans and as a result, does not taste like vanilla,” the complaint states.

Per the suit, an analysis of the Wholesome Pantry “Vanilla” almond milk reveals that the product contains an “abnormal excess” of vanillin, a flavor component of vanilla that can be added to simulate real vanilla flavor. The amount of vanillin in the almond milk relative to the amount of other odor-active compounds also found in authentic vanilla “is a strong indicator” that the product contains vanillin from non-vanilla sources, the suit alleges.

Moreover, the absence of other flavor components normally found in vanilla sourced from vanilla beans indicates that although the product may contain a trace amount of real vanilla, its flavor is derived mainly from synthetic vanillin from wood pulp or petroleum derivatives, the case avers.

The lawsuit alleges the defendant’s “Vanilla” representation on the Wholesome Pantry almond milk’s front label sans any qualifying terms—i.e. “flavored” or “other natural flavors”—is misleading given reasonable consumers would expect a product labeled in such a way to be flavored exclusively with vanilla beans. The case goes on to argue that it is false and misleading to describe the taste of the almond milk as “Vanilla” since the product lacks detectable levels of the odor-active compounds “that are critical to the expected vanilla taste.”

Further, the front label fails to disclose the presence of an artificial flavor, i.e., vanillin, as required by food labeling regulations, the suit argues. Because natural vanillin comes only from vanilla beans, the excess of vanillin detected in the almond milk indicates that the added vanillin comes from non-natural sources and is therefore artificial, the case claims.

Still further, the lawsuit argues the product’s ingredients list clouds the truth with regard to the source of its vanilla flavor in that it lists “natural flavor.” According to the case, the ingredients list should more accurately state “natural and artificial flavors” in order to avoid misleading consumers.

“Defendant’s omission and failure to disclose these facts is deceptive and misleading to consumers who want a vanilla flavored product that contains flavoring mainly from vanilla beans and tastes like vanilla,” the suit reads, alleging the defendant’s branding and packaging of the Wholesome Pantry almond milk was “designed to—and does—deceive, mislead, and defraud” consumers.

The lawsuit claims proposed class members—New Jersey and Pennsylvania residents who purchased the almond milk during the applicable statute of limitations period—would not have bought the product, or would have paid less for it, had they known the truth about its flavoring.