The surface of the wheels on 2017 and newer Hyundai Santa Fe and Veloster models can delaminate and peel due to a defect, a class action alleges.

The surface of the wheels on 2017 and newer Hyundai Santa Fe and Veloster models can delaminate and peel due to a defect, a proposed class action alleges. 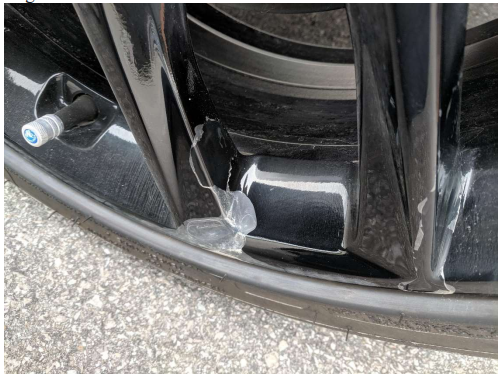 The 17-page suit, filed in California on July 23, contends that the apparent defect causes affected vehicles to have an unsightly appearance and harms the cars’ overall value. Per the lawsuit, defendant Hyundai Motor America knew of the paint-peeling issue yet failed to disclose the problem at the point of sale and has “refused” to repair customers’ wheels.

According to the case, Hyundai’s conduct in manufacturing and selling vehicles with defective wheels and then refusing to repair the issue is “deceptive, misleading, and in violation of its own express warranty.” The suit claims the circumstances that cause the defect to manifest were present at the time of manufacture, with the issue alleged to stem from “a defect that prevents the protective surface coating on the wheel from properly adhering to the underlying metal.”

Per the complaint, the defect is latent and could not have been reasonably discovered at the time a driver bought or leased their vehicle.

“Indeed, consumers are first made aware of the wheel defect after they have taken delivery of the vehicle and the wheel surface begins to disintegrage [sic] over the course of their ownership of the vehicle,” the case says.

A cursory internet search brings up dozens of comments and complaints from Hyundai drivers pertaining to the apparently defective wheels, the suit continues. Per the case, some customers have reported experiencing the paint-peeling issue on their wheels after less than a year of ownership.

The plaintiff, a New York resident, claims the wheels on her 2017 Hyundai Veloster began to peel after three years of ownership and with 52,000 miles on the car. On both occasions on which the woman brought her Veloster to the dealer to request that they fix the wheels under warranty, the dealership denied coverage even though the vehicle was within its five-year/60,000-mile new vehicle warranty, the case claims.

The lawsuit contends the alleged wheel defect experienced by Hyundai owners does not conform to industry standards given wheel surfaces are typically expected to last for the lifetime of a car.

“Had Plaintiff and other putative Class members known that Hyundai would deny warranty claims made within the ‘New Vehicle’ warranty period they would not have purchased Hyundai’s vehicles at the prices that they paid,” the suit says.

The case looks to represent all persons who, within the applicable statute of limitations and as shown by Hyundai’s records, bought a new or used Hyundai vehicle that exhibited degradation of the wheel surface within the new vehicle warranty period.