The maker of the Steaz brand of iced tea beverages is one of the latest companies to come under fire over product labels that claim the drink is “Lightly Sweetened.” A proposed class action lawsuit argues that although Steaz maker Tipp Distributors, Inc. implies that the product has low sugar content, the drink actually contains “significant amounts” of added sugar. The case begins by describing the growing awareness among consumers of health problems linked to excessive sugar consumption, including heart disease, Type 2 diabetes, dental caries, and even cancer due to “certain cancers’ relationship to obesity.” According to the lawsuit, the U.S. Food and Drug Administration (FDA) has attempted to encourage limitations on sugar intake by imposing specific labeling requirements for products that contain added sugar.

Although the agency allows for the use of “no sugar” and “less sugar” claims on product labels, the FDA does not authorize the use of undefined “low sugar” claims, the suit says. To that end, the defendant’s “Lightly Sweetened” statement on Steaz iced tea products, which the lawsuit argues is understood by consumers to equate to a “low sugar” claim, is therefore not permitted under federal law, the plaintiff alleges.

The case further argues that the “Lightly Sweetened” statement on Steaz iced tea labels is deceptive to consumers in that the product actually contains “significant amounts” of added sugar. In fact, the lawsuit alleges, the drink’s 20 grams of added sugar—its second most predominant ingredient by weight—can even be considered “high” sugar content given the recommended maximum daily amount of added sugars based on a 2,000-calorie diet is only 50 grams. 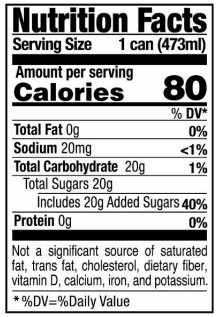 The case avers that the defendant’s misrepresentation of Steaz iced tea as “Lightly Sweetened” can be harmful to consumers who seek products with lower sugar content for health reasons.

“To represent a product as ‘lightly sweetened’ that contains almost half of recommended daily added sugar intake poses ‘a specific risk of harm to consumers seeking to lower their sugar consumption, including those with diet-related diseases, such as Type 2 diabetes,’” the complaint reads.

Notwithstanding health-related concerns, Steaz product labels have harmed those who bought the product in that they paid what the case claims is a premium price for a drink that was worth “materially less than its value as represented by defendant.” Echoing lawsuits filed this month over similar allegations, the plaintiff says she would not have purchased the product, or would have paid less for the beverage, had she known the truth about the tea’s sugar content.