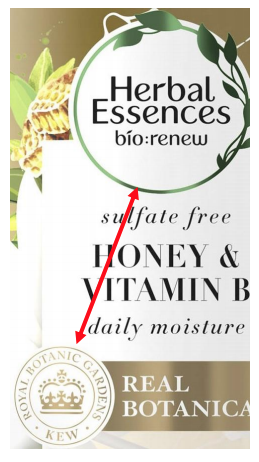 Filed in New York federal court, the 16-page lawsuit alleges Herbal Essences buyers are mistakenly led to believe the product’s ingredients come from plants and are free from chemical modification or processing.

Moreover, the suit says the defendant’s use of the Royal Botanical Gardens, Kew seal on bottles of the shampoo is essentially fraudulent in that Procter & Gamble has not disclosed to consumers that it has paid the U.K.-based public botanical research and education institution, described in the complaint as a “quasi-government agency,” for the privilege.

The plaintiff, a New York consumer, additionally claims the name of the shampoo itself—“Bio:Renew”—is misleading given the allegedly synthetic nature of the product’s ingredients.

“Defendant’s marketing is designed to—and does—deceive, mislead, and defraud Plaintiff and consumers,” the suit alleges, claiming Procter & Gamble has sold more of the shampoo and at higher prices than it would have in the absence of the apparent misrepresentations.

According to the complaint, the seal of the Royal Botanical Gardens, Kew comes across to consumers as a certification or endorsement of the product by the organization. Given the nature of the organization, consumers, the case continues, reasonably expect that the Royal Botanical Gardens, Kew endorsement is related to the plant-based content and components of the shampoo.

More specifically, the Royal Botanical Gardens, Kew seal represents to consumers that the organization has “thoroughly assessed the Product” with regard to the use of plants and plant-based ingredients and stewardship for the environment, the complaint says. Overall, the “common understanding” of botanicals leads consumers to believe the shampoo’s ingredients “will derive mainly or exclusively from plants” that have undergone minimal processing and modification, the case reads.

“Consumers do not expect the Product’s ingredients will undergo chemical transformations which render them substantially distinct from their starting material, which was previously part of a plant,” the lawsuit says.

In truth, however, the Royal Botanical Gardens, Kew has not endorsed the defendant’s Herbal Essences Bio:Renew shampoo, even if the organization’s seal is displayed nearly as prominently on the label as the product’s brand name, according to the case.

“Defendant failed to disclose that it made numerous payments to the organization for the use of its prestigious seal,” the suit claims. “In contrast to a traditional endorsement relationship, i.e., an athlete promoting a shampoo on a television commercial, where it is understood that the endorser is compensated, the endorsing organization is a quasi-government agency.”

The case goes on to list a number of synthetic substances used as the main ingredients in the shampoo, which stands in stark contrast to what consumers understand to be “botanicals” or plant-based ingredients. While the substances may be derived from a plant-sourced starting material, they’re then subject to “substantial chemical modification and processing,” such that the resulting ingredients are “vastly and fundamentally different” from their planted-based sources, the lawsuit says.