A class action alleges certain 2013-2019 Ford and Lincoln vehicles equipped with an Ecoboost engine suffer from a defect that can cause coolant leakage and other serious damage.

Ford Motor Company faces a proposed class action filed by five drivers who allege the automaker’s Ecoboost engine is plagued by a defect that can cause coolant to leak into the engine’s cylinders. 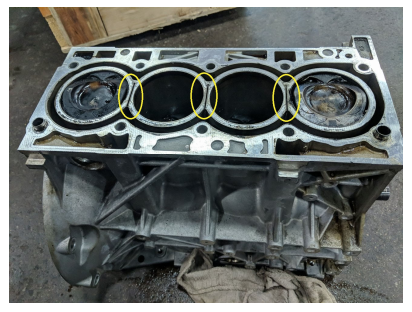 The 74-page lawsuit out of Delaware federal court says coolant leaks caused by the Ecoboost engine defect can lead to overheating, the cracking of the cylinder head and, in some instances, total engine failure or fires, as well as corrosion, oil dilution and contamination, and other potentially catastrophic damage. The suit links the apparent Ecoboost defect to “the design and/or poor manufacturing of the engine block and cylinder head,” including the use by Ford of an “inadequate” cylinder head seal with grooves at the point where the cylinder head attaches to the engine block (circled in yellow).

According to the complaint, the following Ford and Lincoln models—the “class vehicles”—equipped with a 1.5-, 1.6- or 2.0-liter Ecoboost engine may experience coolant leaks:

In a non-defective engine, liquid coolant, which prevents overheating, travels through a defined path around the engine block and cylinder head, thereby keeping the engine cool, the suit explains. The coolant absorbs transferred heat when it comes into contact with the engine and then flows through a hose and into the radiator to cool down before re-circulating through the engine and continuing the cycle, the case reads. 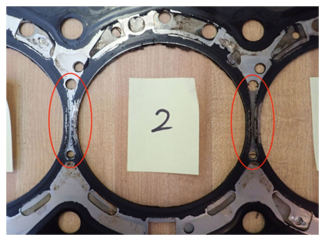 In the above-listed Ford and Lincoln models, however, the coolant “leaches” through the grooves on the cylinder head and pools as it travels through the engine, the lawsuit claims. According to the complaint, the pools of coolant degrade an engine’s gasket seals (pictured left) and eventually cause the coolant to leak into the engine’s cylinders.

The problems caused by Ecoboost coolant leaks are two-fold, the lawsuit says. For one, an engine cannot remain properly cooled without sufficient coolant, leading to overheating, per the suit. Overheating can crack an engine’s cylinder heads, warp other internal components and at a certain temperature cause loss of oil viscosity, which can precede engine seizure or fire, the lawsuit says.

Second, coolant that’s leaked into an engine’s cylinders can cause the engine to misfire, the case continues. More specifically, leaked coolant is burned through an engine’s combustion chamber and sent exiting through the vehicle’s exhaust, which can produce smoke, according to the complaint. Further, coolant that’s entered a cylinder can mix with oil on the cylinder walls, causing oil dilution and/or contamination and in turn corrosion and excessive wear on bearings and internal engine surfaces, the case says.

Per the lawsuit, these engine troubles linked to coolant leaks can occur at low mileage.

Despite possessing “extensive knowledge” of the problem, Ford has failed to provide owners or lessees with a permanent fix to the Ecoboost coolant leak defect, the lawsuit says. Moreover, the automaker has not addressed the source of the issue, choosing instead to perform merely temporary “stop-gap remedies” such as installing coolant level sensors, the case relays.

While a coolant level sensor is intended to alert a driver to when their coolant must be refilled, the sensor does not prevent an affected Ecoboost engine from losing even more coolant, much less avert coolant from leaking into an engine’s cylinders, the complaint specifies, alleging that other supposed repairs on Ford’s part to address the defect never actually do so.

When an Ecoboost engine overheats or fails after the expiration of a vehicle’s warranty, a driver is left to pay out of pocket for repairs and may even have to return for repeated service visits, the suit says. These repairs, according to the case, can include a full engine replacement costing thousands of dollars.

According to the lawsuit, Ford has known of the Ecoboost coolant leak problem since at least 2010, based on pre-production tests, early warranty claims, replacement part orders, numerous technical service bulletins and consumer complaints submitted to the automaker’s dealer network and the National Highway Traffic Safety Administration (NHTSA). Nevertheless, Ford has “knowingly, actively and affirmatively omitted and concealed the existence” of the defect in order to sell more vehicles, the suit alleges. As for owners and lessees, the complaint alleges the drivers have overpaid for vehicles that increase their chance of being involved in a collision due to an engine overheating, catching fire or catastrophically failing, the lawsuit says.

“If Plaintiff and Class Members had known about the Engine Defect at the time of sale or lease, Plaintiffs and Class Members would not have purchased or leased the Class Vehicles or would have paid less for them,” the case reads.