The 18-page lawsuit relays that pediatric health organizations such as the American Academy of Pediatrics Committee on Nutrition and a similar World Health Organization subcommittee have concluded that the nutritional needs of children older than 12 months should be met with whole cow’s milk, water and healthy whole foods. Transition formula such as the Gerber Good Start Grow powder with iron is “not recommended,” the case says.

More specifically, the suit contends that Nestlé USA has not done enough to distinguish how its Good Start Gentle Pro Infant Formula (left) is different than its Good Start Grow toddler product: 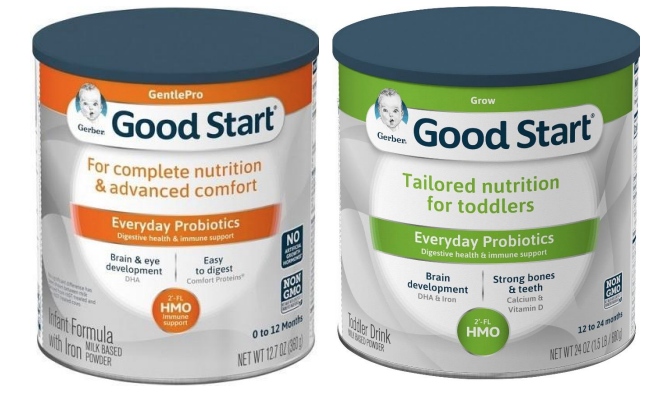 The failure to clearly identify and describe a product in a truthful way that distinguishes it from other items harms caregivers because the nutritional requirements of infants are different from those of children between 12 and 24 months, the lawsuit argues.

“Through the similar representations, caregivers get the incorrect impression that the Gerber Good Start Grow Toddler Drink is the ‘next step’ for children beyond infancy,” the complaint states. “The identical labeling elements further this impression and ride the coattails of the carefully regulated infant formula products to drive sales.”

Further, the case states that the Gerber Good Start Grow toddler product is “nutritionally inconsistent with expert advice,” including because it contains 15 grams of added sugar. The complaint argues that even if a caregiver were to scrutinize the product packaging, they would not learn that giving foods with added sugars to children over 12 months old is “inconsistent and contrary to their nutritional needs.”

According to the lawsuit, the similar labeling of the Gerber infant and toddler formulas may lead a caregiver to make an inaccurate and ill-advised nutritional decision.

“Defendant misrepresented the Product through affirmative statements, half-truths, and omissions,” the case alleges. “Defendant sold more of the Product and at a higher price than it would have in [the] absence of this misconduct, resulting in additional profits at the expense of consumers.”