A proposed class action alleges Morton Salt, Inc. has misrepresented the location of where its purported Himalayan pink salt products are sourced.

A proposed class action alleges Morton Salt, Inc. has misrepresented the location of where its purported Himalayan pink salt products are sourced. 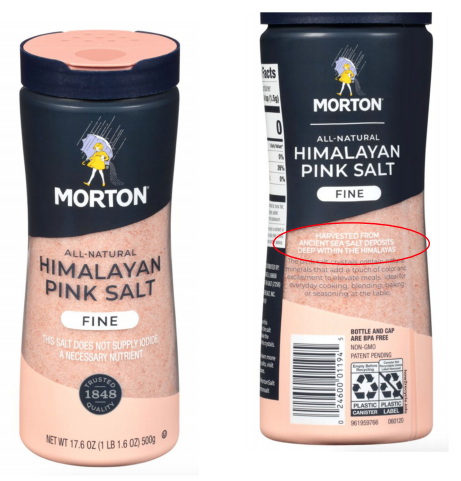 According to the 20-page complaint, Morton’s Himalayan sea salt is harvested not from “ancient sea salt deposits deep within the Himalayas” as stated on product labels, but from salt mines hundreds of miles away in Pakistan.

As a result of the alleged “widespread false and deceptive advertising” on product labels, Morton has been able to charge consumers more money for a product they’ve been misled to believe comes from the pristine, iron-rich Himalayan Mountains that stretch across the northeastern portion of India, the suit claims.

Although Himalayan pink salt is often marketed as coming from an anonymous Himalayan mountain location, most salt touted as such is mined in the Khewra Salt Mine in Northern Pakistan, hundreds of miles away from the snowy Himalayas, the case begins. Per the suit, the misrepresentation of the origins of pink salt is so pervasive that Pakistani officials are set to register Khewra salt with international trade bodies to ensure the product’s true origin is not “obfuscated by misleading advertising.”

Given Morton’s labeling of its pink salt, consumers reasonably expect that the product comes from the Himalayan Mountains, the suit stresses. Nowhere on the salt’s label is it disclosed that the salt was not mined in the Himalayas, the case says, alleging Morton knew of the true location where the salt was sourced yet nevertheless chose to misleadingly label the product.

“On information and belief, Defendant, knew that their Salt Products were not from the Himalayas, yet chose to include the Himalayan Claims because it did not believe its customers would know the difference,” the lawsuit alleges.

The case looks to represent all consumers nationwide who’ve bought any Morton salt product that was labeled as mined from the Himalayan Mountains.