Several major retailers face a class action over what one consumer alleges is a "pink tax," or a price difference between products marketed toward females versus those marketed toward men.

Unilever, Walgreens, CVS and Walmart are among the defendants in a proposed class action filed over what a Missouri woman alleges is the retailers’ “pink tax,” the price difference for female-specific products or services compared to their nearly identical counterparts offered for men. The 21-page lawsuit, which resides in Missouri’s Eastern District after being removed from circuit court, begins by explaining that “study after study” has found that women are systematically charged more than men for “essentially the exact same products or services.” The case, which also names as defendants Target Corporation, Schnuck Markets and Dierbergs Markets, states that gender-based pricing discrimination is a scourge that harms female consumers despite the passage of laws in states such as New York, Florida and California that have outlawed the practice.

Though the lawsuit concedes that gender-influenced pricing is justified under certain circumstances and for certain products, there exists for every acceptable instance “scores more” concerning nearly identical products for which the practice “is unjustified and completely unfair,” according to the case.

Stressed by the suit is that the average consumer is often unaware that nearly identical products marketed toward male and female shoppers are subject to “pink tax” price differences.

“The average consumer, for instance, is largely unaware that nearly-identical products marketed to the opposite sex are substantially cheaper, especially when products are differentiated in size and packaging style and often located in different parts of a store,” the complaint reads.

At the heart of the case is Unilever’s “Dove” brand of “Advanced Care” antiperspirant deodorant. According to the suit, Dove’s “Advanced Care” line of products is marketed toward women and generally found in the “women’s” section of the defendants’ stores. The scents for the “Advanced Care” deodorant products are considered relatively “feminine,” the lawsuit says, as is the products’ packaging when contrasted with Dove’s similar men’s products. 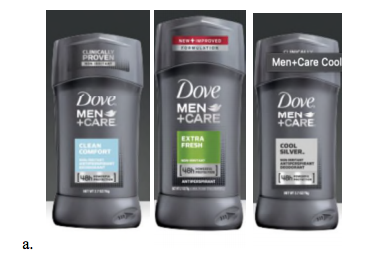 According to the lawsuit, Dove’s “Advanced Care” antiperspirant shares the same or nearly the same ingredients as the variety marketed toward men under the “Men + Care” line. The suit sticks on the ingredients lists for both products, which are nearly identical save for one component, Hydroxyethyl Urea, considered to be “the least predominant ingredient” in the deodorant.

As the complaint tells it, the minimal presence of one ingredient in the so-called female line of Dove “Advanced Care” antiperspirant is not a good enough reason for the product to cost more than Unilever’s substantially similar “Men + Care” product. From the case:

“The presence of minimal amounts of Hydroxyethyl Urea in the Product does not justify the greatly inflated price at which it is sold in comparison to ‘Men + Care;’ that face does not, in any manner, cure the Defendants’ gender-discriminatory pricing of the Product from being an ‘unfair practice.’”

In sum, the lawsuit says, the retail defendants have charged customers substantially more for the “women’s version” of the exact same product.

“There are few better examples of the gender discriminatory and unfair ‘Pink Tax’ than in the Retail Defendants’ sale of the product to Missouri consumers,” the suit states.

Citing the Missouri Merchandising Practice Act, which forbids unfair practices with regard to retail, the lawsuit looks to represent a class of consumers in the state who bought Dove-brand Advanced Care antiperspirant deodorant from any of the defendants in Missouri within the last five years.