A class action claims Walgreens misrepresented the value size of its Women Multivitamin Tablets as gelatin-free when the product contains “notable doses” of gelatin.

A proposed class action claims Walgreen Company has misrepresented the value size of its Women Multivitamin Tablets as gelatin-free when the product, in fact, contains “notable doses” of gelatin.

According to the lawsuit, consumers are misled by the non-disclosure of gelatin on the Walgreens vitamin’s label given the supplement is marketed as comparable to a product manufactured by Centrum that does list gelatin among its ingredients. The case alleges that a reasonable consumer, when comparing the two products, would be led to believe that the Walgreens vitamins are a generic, gelatin-free version of the brand name Centrum product.

The lawsuit claims Walgreen Company’s conduct has misled unknowing consumers into consuming gelatin when they’ve specifically attempted to avoid the ingredient due to allergy, religious, dietary or moral reasons.

According to the case, Walgreens attempts to market its multivitamin tablets as a generic alternative to Centrum’s product by stating “Compare to Centrum Women” on the label and using a similar color scheme. Likewise, on the defendant’s website, consumers who view the Centrum product are told to “Compare and Save 29% with Walgreens Brand,” the lawsuit says. 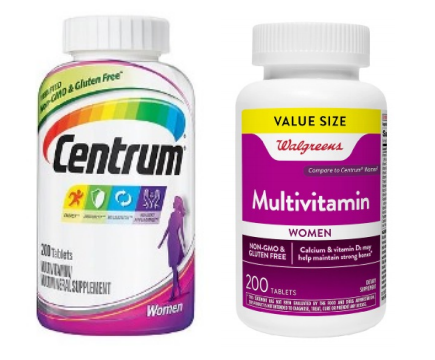 The marketing of the Walgreens multivitamin as a generic alternative to Centrum multivitamins, coupled with the notable absence of gelatin among the product’s ingredients, is enough to mislead consumers into believing Walgreens’ product is a gelatin-free version of the brand name alternative, the case argues.

According to the lawsuit, Walgreens’ failure to disclose the presence of gelatin oversteps dietary supplement labeling regulations, which mandate that all ingredients be disclosed on the product’s label.

The plaintiff says she relied on Walgreens’ label representations when purchasing the Women Multivitamin Tablets and suffered allergic reactions after consuming the gelatin in the product.

The lawsuit, filed on December 25, 2020, looks to cover all U.S. residents who, between November 2, 2015 and the final disposition of this and any related actions, purchased the Walgreens Women Multivitamin for personal use and not for resale.