A class action argues that the label of Gushers fruit-flavored snacks is misleading in that it fails to disclose that the product contains artificial flavors.

A proposed class action argues that the label of Gushers fruit-flavored snacks is misleading to consumers in that it fails to disclose that the product contains artificial flavoring ingredients. 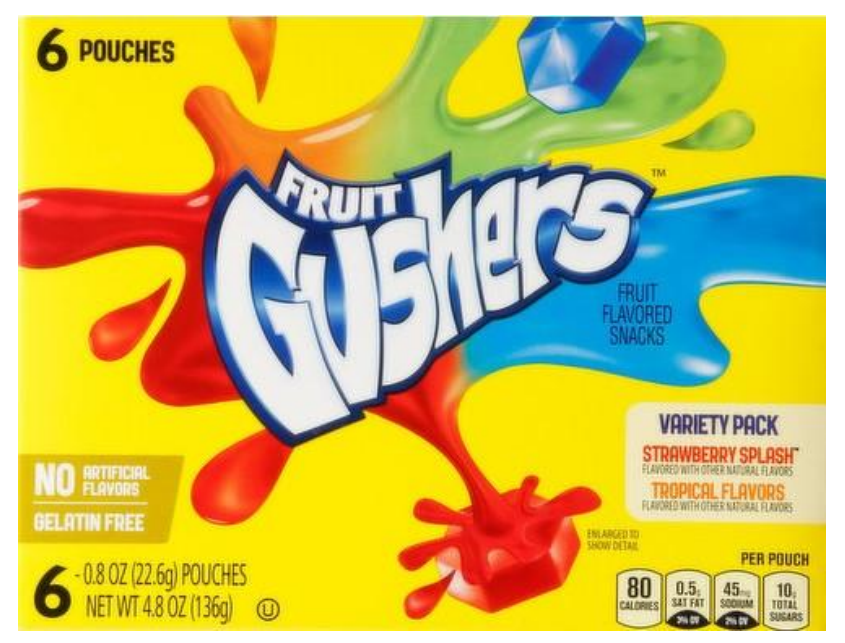 The 25-page lawsuit says that although defendant General Mills Sales, Inc. represents on boxes of its strawberry and tropical fruit varieties of Gushers that the product contains “No Artificial Flavors,” the snack’s ingredients list discloses the presence of malic acid. According to the suit, the malic acid used by General Mills is an artificial flavoring agent produced from petroleum in a “high-pressure, high-temperature, catalytic process.”

The lawsuit alleges that the presence of malic acid in Gushers renders the representations on the snack’s label misleading to reasonable consumers.

“The Product’s front label is misleading because it states, ‘No Artificial Flavors,’ ‘Fruit Flavored Snacks,’ and ‘Flavored With Other Natural Flavors,’ when these statements are false and misleading,” the complaint reads, claiming that General Mills has violated federal and state food labeling laws.

The case states that although malic acid, which lends a fruity, tart flavor, occurs naturally in fruit, it can also be produced synthetically from petroleum. According to the filing, “[l]aboratory analysis” has shown that the Gushers snack contains DL-malic acid, an artificial mixture of natural L-malic acid and artificial D-malic acid.

Per the suit, the addition of DL-malic acid to Gushers renders the snack artificially flavored, even if it also contains natural flavors.

The lawsuit contends that although General Mills could have used L-malic acid, natural citric acid or natural strawberry or tropical fruit flavors in the Gushers product, the manufacturer instead chose to use artificial DL-malic acid, presumably because “it was likely cheaper or more accurately resembled the natural strawberry and tropical fruit flavors than citric acid or other acids.”

The suit goes on to claim that General Mills has declared the presence of malic acid in the Gushers’ ingredients list “in a way that is misleading and contrary to law” because the substance is listed merely as “malic acid” instead of by its specific name, “DL-malic acid.”

According to the lawsuit, federal and state food labeling regulations require that the source of a food’s characterizing flavor—such as strawberry or tropical fruit, in this case—be truthfully disclosed. The suit says that since the DL-malic acid “simulates, resembles and reinforces” the Gushers’ characterizing flavors, the defendant was required to denote on the product’s front label that it is artificially flavored.

Per the complaint, consumers rely on companies such as General Mills to “honestly and lawfully market and describe” a food’s components, attributes and features, relative to itself and comparable or alternative products. The case claims the value of the Gushers product was less than its value as represented by General Mills.

The lawsuit looks to cover anyone in Illinois, Arkansas, Iowa, Utah, Idaho, Alaska or Montana who purchased the Gushers product during the relevant statute of limitations period.