A class action lawsuit aims to take CVS to task for its alleged role in perpetuating the myth that cotton swabs are appropriate and safe to use for cleaning the ears.

A proposed class action lawsuit aims to take CVS to task for its alleged role in perpetuating the myth that cotton swabs are appropriate and safe to use for cleaning the ears.

The 18-page lawsuit says that, on the contrary, using cotton swabs to clean the ear canal is dangerous, not medically advised and “completely unnecessary,” per otolaryngological guidelines. 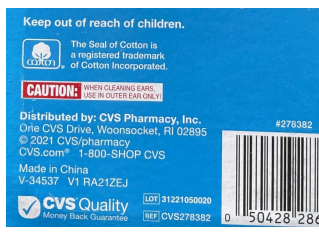 The case takes issue in particular with the warning found on CVS’s private-label 375-count cotton swab packages, which reads, “When cleaning ears, use in outer ear only!” The lawsuit contends that the phrasing of this warning, found on packages of CVS’s reportedly best-selling cotton swab variety, is “completely erroneous” as the use of the word “when” “essentially invites the consumer to clean the ears with a cotton swab.”

“The ‘warning,’ read in its totality, is encouraging consumers to use the product in a manner that clearly violates the medical guidance and is likely to cause injuries,” the case charges.

The complaint says that this warning impacts a large number of consumers given CVS’s position as a “behemoth in the pharmacy space.” As the lawsuit tells it, the apparently inadequate warning on CVS cotton swab packages is either a mistake by the retailer or a discreet, profit-protecting attempt to keep an adequate warning off a top-selling product.

“At its best, CVS made a mistake in its packaging which is, nonetheless, causing consumers to be deceived about the proper uses for its cotton swabs,” the lawsuit reads. “At its worst, though, CVS surreptitiously kept the warning for its highest selling cotton swab packaging vague as there is no doubt that the lion’s share of the revenue generated from this product is from sales to consumers cleaning ears with a cotton swab.”

The cotton swab warning’s “significant flaws” include its lack of greater detail and specificity, the suit says, noting that CVS nonetheless placed a warning on another variety of its private-label cotton swabs that makes clear that the product is not to be used in the ear canal:

The lawsuit looks to represent all persons in the United States who bought 375-count packages of CVS cotton swabs in the “classic-looking clear box with a cardboard backing” at any time from May 2017 to the present.