The companies behind the JustCBD brand of cannabidiol products have repeatedly overstated the amounts of CBD found in their array of gummies, tinctures, oils, dried fruit, honey, cartridges and dog treats, according to a proposed class action.

In truth, the 31-page lawsuit claims, the products made, distributed and sold by defendants Just Brands USA, Inc.; Just Brands FL, Inc.; Just Brands, Inc.; Just CBD, LLC; and SSGI Financial Services, Inc. contain “only a fraction” of the amount of CBD advertised on labels and packaging. Further still, some products contain no CBD whatsoever, according to the suit.

“By misrepresenting the true quantity of CBD in their CBD products, Defendants are able to charge a substantial price premium on account of these fictitious CBD quantity claims,” the case alleges, contending that the companies’ “multiple and prominent systematic mislabeling” of products is an unlawful and unfair business practice.

While the defendants’ purport to take honesty and transparency seriously, the amounts of CBD found in certain JustCBD products tell a different story, according to the lawsuit. As an example, the complaint says the defendants’ JustCBD Honey Liquid Tincture, which is advertised as containing 100mg of CBD per bottle, actually contains just 48.92mg, an alleged underfill of more than 50 percent. Similarly, the defendants’ JustCBD Apple Rings Gummies, advertised as containing 250mg of CBD, in truth contains “a non-detectable quantity” of cannabidiol, the lawsuit claims.

Included in the complaint is a chart purporting to show the differences in the actual CBD content found in the defendants’ products versus the amounts stated on product labels: 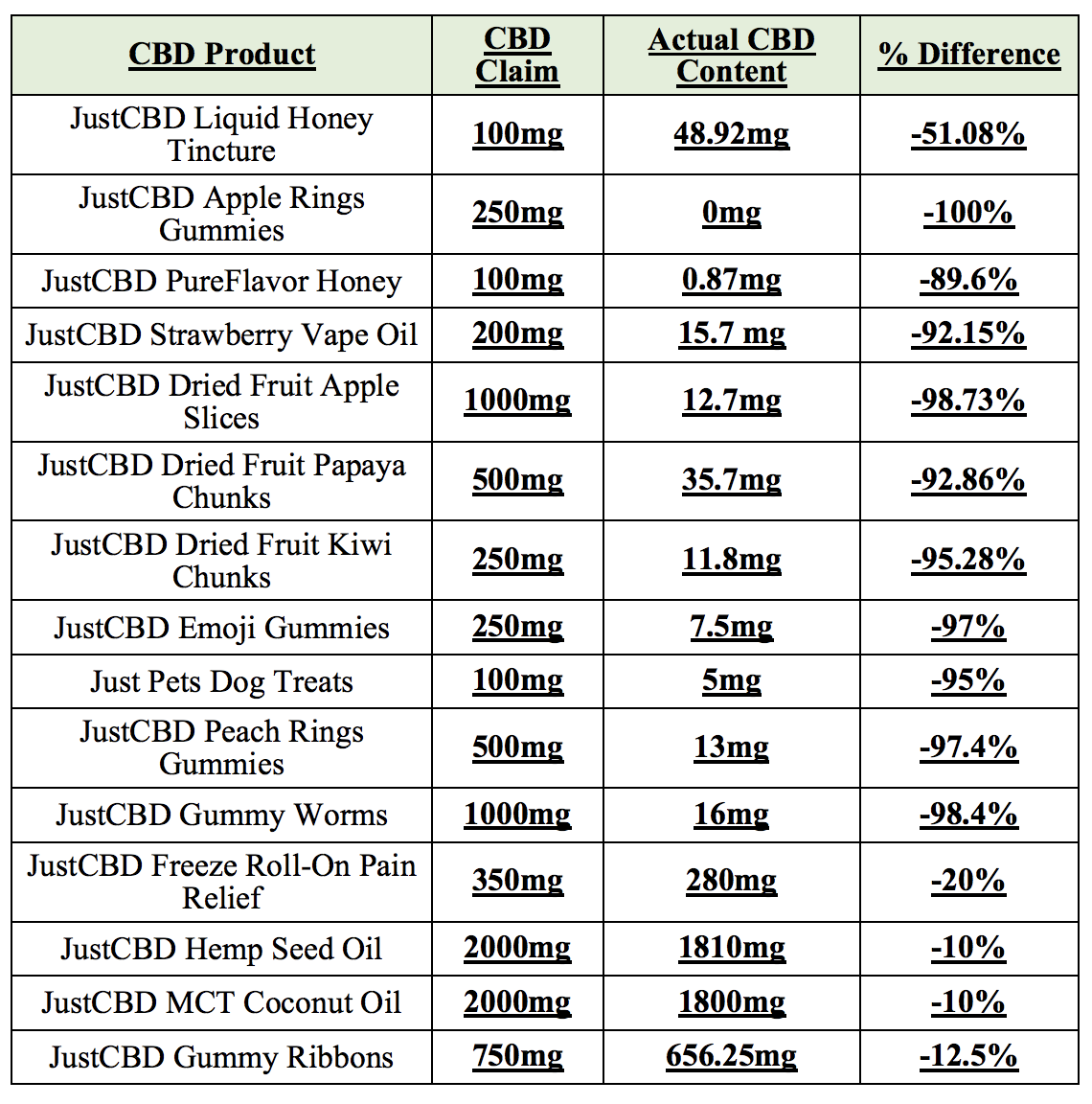 The plaintiff bought his JustCBD cartridges after reviewing specifics of the product on JustCBDStore.com, the case says. According to the suit, the consumer relied on the defendants’ label representations, disclosures and marketing materials, and understood such as representations and warranties by the companies that the products contained the stated amount of CBD. The man would not have bought JustCBD cartridges had he known the defendants’ cannabidiol quantity representations were untrue, the suit avers.

Cannabidiol is described in the complaint as a naturally occurring phytocannabinoid found in certain strains of hemp that’s used commonly as an additive given its apparent medicinal properties. In many instances, CBD is used to treat anxiety, insomnia, depression, diabetes, PTSD and chronic pain, according to the suit, and can be ingested via inhalation of smoke or vapor, as an aerosol spray, and by mouth.

In all, the plaintiff alleges the defendants’ CBD claims are “a farce.”