A class action alleges the maker of Country Crock-brand Plant Butter Made With Olive Oil has taken advantage of consumers by misrepresenting the product as a healthier, plant-based version of regular margarine.

A proposed class action alleges the maker of Country Crock-brand Plant Butter Made With Olive Oil has taken advantage of consumers by misrepresenting the product as a healthier, plant-based version of regular margarine. 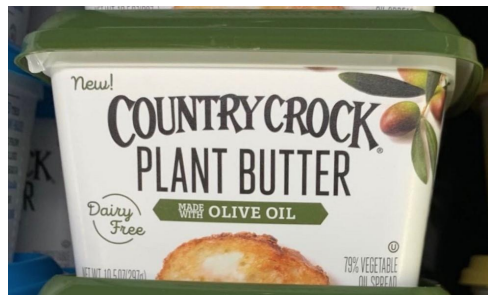 The 14-page suit against Upfield US Inc. contends that the company specifically markets the Country Crock Plant Butter to consumers in search of plant-based foods for health and environmental reasons despite the fact that it is twice as calorie-dense as margarine due to a higher concentration of saturated fat. Moreover, even though the company claims that the product is “Made With Olive Oil,” and labels it with pictures of olives on olive branches, among other “green-themed” imagery, the butter contains less olive oil—and more kernel, canola and palm fruit oils—than buyers expect, the lawsuit alleges.

Overall, the labeling of Country Crock Plant Butter may mislead a buyer into thinking the product contains only natural ingredients, the suit contends.

“Consumers may erroneously expect that ‘plant based’ means the Product contains only natural ingredients when this would be false, because the mix of vegetable oils are subject to chemical reactions in the presence of chemical catalysts,” the complaint says.

Per the case, the statement that the butter is “Made With Olive Oil” is taken by consumers to mean that the product contains a relatively significant and/or predominant amount of the ingredient. In contrast, the suit says, palm and canola oil do not possess the heart-healthy, anti-inflammatory attributes of olive oil.

“Reasonable consumers must and do rely on a company to honestly identify and describe the components, attributes, and features of a product, relative to itself and other comparable products or alternatives,” the lawsuit argues. “The value of the Product that Plaintiff purchased was materially less than its value as represented by Defendant.”

The suit claims Upfield US has been able to sell more Country Crock Plant Butter Made With Olive Oil, and at higher prices, than it would have absent its allegedly misleading labeling.