A lawsuit claims buyers of Kirkland Signature “Chocolate Almond Dipped Vanilla” ice cream bars are not told that the dessert’s coating is made of mostly vegetable oils.

The lawsuit detailed on this page was dismissed after a federal judge found that the plaintiff had not plausibly shown that a reasonable consumer would be deceived by the Kirkland Signature ice cream bars’ label.

Judge Charles Ronald Norgle stated in a July 21 order that the plaintiff had failed to show that his definition of “chocolate”—which includes cacao ingredients and excludes vegetable oils—lines up with what reasonable consumers expect in a food labeled as “chocolate.”

“Plaintiff’s claim that consumers ‘expect chocolate to be made from cacao beans’ does not mean that reasonable consumers expect it to be made without anything else,” the judge wrote, noting that the ice cream bars’ label itself does not promise that the chocolate in the coating will be made entirely of cacao bean ingredients.

Judge Norgle also took issue with the plaintiff’s argument that the ice cream bars’ coating contains more vegetable oils than chocolate, finding that the plaintiff had failed to include the sugar and dairy ingredients in his calculation of how much chocolate and vegetable oil made up the coating.

Finally, the judge found that the plaintiff’s assertion that the chocolate coating provided a “waxy and oily” taste instead of the expected “chocolatey” taste is irrelevant because he had failed to show that reasonable consumers would expect the same taste and mouthfeel.

Judge Norgle dismissed the plaintiff’s claims with prejudice, noting that amending the complaint “would be futile.”

A proposed class action claims Costco’s Kirkland Signature-brand “Chocolate Almond Dipped Vanilla” ice cream bars are misleadingly labeled in that buyers are not told that the dessert’s coating is made of mostly vegetable oils. 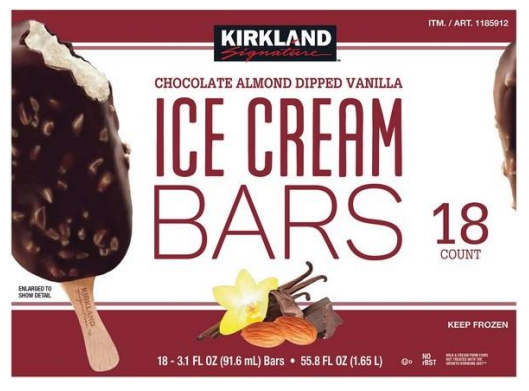 Per the 16-page lawsuit, consumers expect upon viewing the ice cream bars’ front label that the product’s coating contains mostly chocolate from cacao beans. In reality, however, Costco has substituted less expensive vegetable oils for cocoa butter without disclosing that the ice cream bars do not contain as much chocolate as a reasonable buyer would expect, the case alleges.

“The representation as ‘Chocolate [Almond] Dipped,’ with pictures of chocolate and other key ingredients, is false, deceptive and misleading because the ‘Chocolate’ is mainly the opposite of chocolate – vegetable oils,” the complaint contends.

According to the suit, consumers understand “chocolate” to contain cocoa solids, i.e., cocoa powder, and cocoa butter from the cacao bean. Genuine chocolate, as the case tells it, does not contain vegetable oils, which the complaint says some companies have attempted to use as an alternative for more expensive cocoa butter.

The lawsuit says consumers prefer chocolate made with cacao ingredients over vegetable oils for several reasons, including that vegetable oils provide less satiety, lack “the creamy and smooth taste” produced by cocoa butter, “contribute to a waxy and oily mouthfeel,” have less nutritional value and are synthetic rather than natural.

Per the case, the Kirkland Signature ice cream bars’ ingredients list reveals that the “chocolate” coating is mostly made up of vegetable oils:

The vegetable oil ingredients, i.e., coconut oil and soybean oil, make up a larger percentage by weight than the cacao bean ingredients in the ice cream bars’ coating, the suit claims. Moreover, the ingredient listed as “unsweetened chocolate processed with alkali” is not actually chocolate but cocoa powder, the case says.

“This means that the Product contains even less chocolate than otherwise assumed, because cocoa powder lacks cocoa butter,” the complaint argues.

The lawsuit alleges the representations on the Kirkland Signature ice cream bars’ front label are misleading given they falsely imply that the product’s coating contains more than a trace amount of chocolate when this is not the case. Per the suit, a recent survey revealed that 60 percent of respondents who viewed the product’s front label expected the ice cream bars to contain more cacao ingredients than they actually did.

Had consumers known the truth, they would not have purchased the ice cream bars, or would have paid less for them, the suit alleges.