A proposed class action claims Tostitos-brand “Hint of Lime” tortilla chips are deceptively labeled in that, unbeknownst to buyers, they contain no lime at all.

A proposed class action claims Tostitos-brand “Hint of Lime” tortilla chips are deceptively labeled in that, unbeknownst to buyers, they contain no lime at all.

The 24-page lawsuit, filed in California on August 25, alleges defendant Frito-Lay North America has labeled its “Hint of Lime” chips in a manner that has deceived consumers who, at the time of purchase, were unaware the product was different than its label represented. Per the suit, consumers have paid a premium for a product they might not have purchased at all had they known that lime was not among the chips’ ingredients.

“Plaintiff and reasonable consumers reasonably believe, define, and assume that tortilla chips labeled as having a ‘HINT OF LIME’ with the statement, ‘HERE’S ANOTHER HINT – SQUEEZE IN MORE FLAVOR WITH SOME SALSA!’ contain some quantity of actual lime,” the complaint says. “In fact, the Product does not contain any lime at all.”

The suit stresses that the front of the “Hint of Lime” tortilla chips packaging emphasizes front and center that the chips therein contain a hint of lime. This representation, the case says, is present in large, bold font so as to immediately catch the eye of a consumer, and below it is the statement prompting a buyer to “…squeeze in more flavor with some salsa.” The implication of the product’s packaging, the case contends, leads consumers to expect that the chips already contain a hint of lime constituting “the main portion of its flavor profile.”

According to the complaint, however, a “disclaimer” found on the lower left-hand corner of the bag of chips, which states “Flavored Tortilla Chips,” is not visible to buyers at the point of sale. The suit says this disclosure, under federal and state food labeling regulations, must be presented in bold type on the product label’s principal display panel and in lines “generally parallel to the base on which the package rests as it is designed to be displayed.” 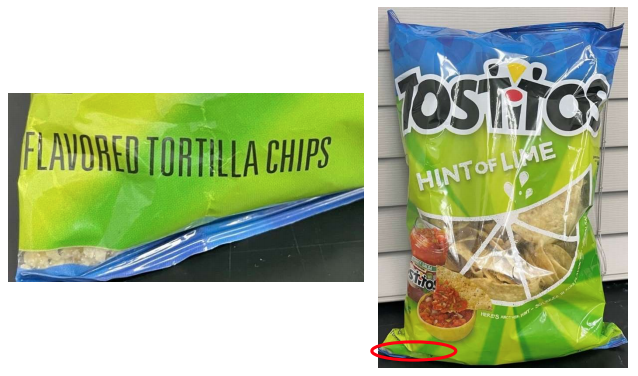 As the filing tells it, although the “Flavored Tortilla Chips” disclosure is in bold type, its size and position pose a problem as far as food labeling laws are concerned.

“Simply put, consumers, like Plaintiff and class members cannot see the miniscule disclaimer in the [grocery] aisle because it is abnormally smaller compared to the representations in large, bold font regarding the presence of lime,” the suit reads. “Given the prevalent ‘Lime’ misrepresentation and the inconspicuous and ambiguous tiny disclaimer at the bottom of the Product’s packaging, Defendant misleads consumers into believing that the Product actually contains lime. Yet, the Product contains no lime at all.”

As for the package’s ingredients list, the suit says it, too, fails to sufficiently disclose that the “Hint of Lime” chips contain no lime.

Because lime juice or lime oil is not a separately identified ingredient, that means the presence of any real lime as a flavor in the chips is minimal, or in trace amounts, the case claims.

The lawsuit looks to represent all persons in California who’ve bought Tostitos “Hint of Lime” tortilla chips for personal, family or household consumption and not for resale since June 24, 2015.