A class action alleges Alka-Seltzer Plus Severe Night Cold & Flu Honey Lemon Zest Mix-In Packets are misbranded in that the medication contains neither honey nor lemon. 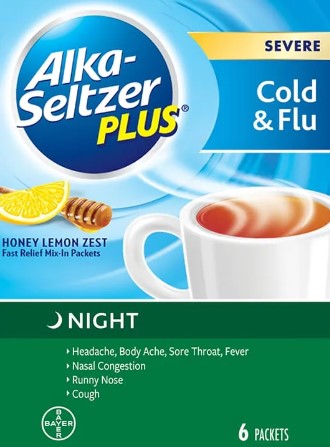 The 10-page lawsuit alleges manufacturer Bayer Healthcare has misled consumers by labeling its over-the-counter Alka-Seltzer medication as “Honey [and] Lemon Zest,” along with images of a lemon wedge and a honey dipper, since the product’s ingredients list makes no mention of either honey or lemon zest.

According to the case, Bayer Healthcare’s alleged misrepresentations appeal to a growing demand for more natural and homeopathic over-the-counter cold and cough relief products. The filing asserts that consumers are increasingly turning away from traditional items based on the belief that they cause unwanted side effects and merely suppress symptoms, while natural varieties “work in concert with the body’s healing mechanisms.” Younger buyers are also more likely to pick over-the-counter products “without long and complicated lists of ingredients, including synthetic components and additives,” the complaint argues.

Based on its labeling, the case contends, consumers assume that the Alka-Seltzer product’s honey and lemon zest ingredients provide some therapeutic benefit in addition to the identified active ingredients, such as immune support. The filing relays, however, that little, if any, evidence exists to support the belief that honey and lemon are useful in treating a cold and other symptoms.

“Nevertheless, despite the recent growth in the OTC natural products category, no credible evidence or studies support the notion that either honey or lemon are effective in treating or reducing the severity and duration of colds, coughs, and the other symptoms identified,” the filing states.

Additionally, there is no credible evidence that honey or lemon enhance immunity, the complaint relays.