A lawsuit claims Aldi failed to disclose on the label of its Emporium Selection “Smoked Gouda” cheese that the product’s taste is derived from added smoke flavor.

A proposed class action claims Aldi has deceived consumers by failing to disclose on the front label of its Emporium Selection-brand “Smoked Gouda” cheese that the product’s taste is derived from added smoke flavor and not solely from the process of smoking. 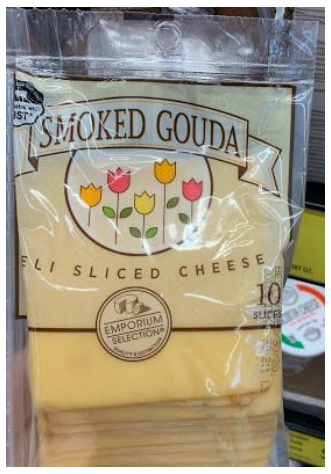 Per the 12-page suit, consumers who view the “Smoked Gouda” representation on the cheese’s package reasonably expect that the product derives its flavor from being smoked and not from added smoke flavor. The product’s ingredients list, however, reveals that the cheese contains “smoke flavor,” which is “smoke condensed into a liquid form,” the case attests.

“Through listing ‘NATURAL SMOKE FLAVOR’ on the ingredient list, the Product tacitly admits that even if it has undergone smoking, it was not smoked enough to sufficiently impart a characterizing smoke flavor,” the complaint argues.

Because Aldi’s “Smoked Gouda” is labeled as “smoked” with no disclosure of added smoke flavor on the front label, consumers reasonably expect that the cheese’s flavor is derived exclusively from the smoking process, the case alleges. Thus, the product is misrepresented as “Smoked Gouda” given the ingredients list reveals that the cheese contains smoke flavor, the suit says.

The lawsuit surmises that even if the cheese were subjected to “a de minimis amount of smoking,” the added smoke flavor cannot impart the same smoked taste derived from the smoking process because it lacks certain compounds that can only be obtained through smoking.

The lawsuit claims Aldi has sold more of the Smoked Gouda product, and at higher prices, than it would have absent the allegedly misleading labeling.

The suit looks to represent Wisconsin, Ohio, Texas, Illinois and Virginia residents who purchased the Smoked Gouda product within the applicable statute of limitations period.