A proposed class action takes issue with the nutrient-focused statements and images used by Molson Coors Beverage Company to advertise the pineapple mango variety of its Vizzy brand of hard seltzer.

Central to the 15-page lawsuit is Molson Coors’ claim that Vizzy hard seltzer is the only such beverage “with antioxidant vitamin C,” purportedly from the “superfruit” acerola. The suit alleges, however, that this claim is “[p]rohibited and [m]isleading” in that, for one, it implies alcohol consumption is a valid way to obtain nutrients.

“By promoting the Product as containing a significant amount of vitamin C, consumers are misled about the nutritional properties of alcoholic beverages,” the lawsuit contends.

The complaint’s May 22 filing comes a little more than two months after the nonprofit Center for Science in the Public Interest sent to FDA Director for the Center for Food Safety and Applied Nutrition Dr. Susan T. Mayne an enforcement request centered on what the letter’s authors called Molson Coors’ “misbranded” Vizzy hard seltzer. In the letter, the CSPI called on the FDA to take action against Molson Coors by formally prohibiting the use of nutrient content claims on alcoholic beverages so as to prevent consumers from being misled. From the letter:

“The labeling of Vizzy Hard Seltzer, made by Molson Coors, features prominent claims declaring that the beverage is made with vitamin C. These claims are in clear violation of the FDA’s fortification policy, which states that: '[FDA does] not consider it appropriate to add vitamins and minerals to alcoholic beverages.' The claims are also misleading in violation of the Federal Food, Drug, and Cosmetic Act (FFDCA) because they suggest that Vizzy is a healthful source of nutrients, obscuring the fact that alcoholic beverages provide empty calories, are associated with serious health conditions, and can impair the body’s metabolism of nutrients. These misleading claims make Vizzy misbranded under the FFDCA.”

The letter’s authors, representatives of the Center for Science in the Public Interest and Consumer Federation of America, signed off on the document by stressing that alcohol is “never a good way to obtain nutrients,” and that the FDA’s failure to act on Molson Coors’ conduct, i.e. expressly prohibit the use of nutrient claims in alcoholic beverage advertising, would tempt more manufacturers to “attempt to market their alcoholic beverages as healthful sources of nutrients, misleading consumers about these drinks, which are not healthy.” 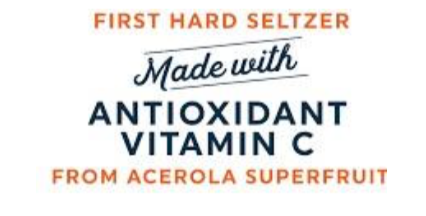 Although the hard seltzer contains 20 percent of the recommended daily intake of vitamin C per serving, the complaint stresses that it is “necessary to consume an alcoholic beverage to get this amount of vitamin C.” Moreover, the lawsuit charges that the emphasis on Vizzy’s vitamin C content and the acerola “superfruit” suggests that the product is a healthful source of nutrients when these claims, in truth, “obscur[e] the fact that alcoholic beverages provide empty calories, are associated with serious health conditions, and can impair the body’s metabolism of nutrients.”

Overhanging Molson Coors’ vitamin-C claims for Vizzy hard seltzer, according to the suit, are the specifics of which words a company can use to relay a food or beverage’s nutrient content so as to avoid misleading consumers. The case states that the terms companies are permitted to use in telling consumers that a product is a “good source” of vitamin C are limited to “good source,” and the authorized synonyms “contains” and “provides.” Unauthorized synonyms are prohibited from being used in a product’s nutrient content claim in order to prevent companies from sharing claims that are or can be misleading, the suit says.

“If a company could escape the reach of the regulations by use of a thesaurus, consumers would be misled,” the lawsuit contends.

According to the lawsuit, the Vizzy statement that it is “with vitamin C” is similar to a “good source” claim yet contains the word “with,” an unauthorized synonym, making its use prohibited. Further, claims made as to Vizzy’s nutrient content run contrary to the FDA’s fortification policy, which establishes guidance with regard to the addition of nutrients to foods such as carbonated and alcoholic beverages, the lawsuit says.

Also challenged in the proposed class action is Molson Coors’ use of the terms “antioxidant [Vitamin C]” and “superfruit [Acerola].” As the lawsuit tells it, these terms give consumers the impression that Vizzy is a “healthful and nutritious source of vitamin C” when, at the end of the day, it is nevertheless an alcoholic beverage. Relaying the known dangers of alcohol consumption, the suit emphasizes that the promotion of alcoholic beverages as nutrient-filled might lead buyers to consume the drinks in quantities greater than what’s recommended.

Lastly, the case centers on the claim that Vizzy hard seltzer contains a “hint” of real mango. Per the suit, although pineapple is listed in the product’s ingredients list, mango is not, meaning any mango in the beverage is “part of the added flavoring and is not present beyond a negligible amount.”