A class action alleges Chobani’s stated commitment to “Fair Trade” with the dairy workers who produce its Greek yogurt is not all it’s cracked up to be.

A proposed class action alleges Chobani’s stated commitment to “Fair Trade” with the dairy workers who produce its Greek yogurt is not all it’s cracked up to be, and amounts to “fairwash[ing]” as a means to sell more products. 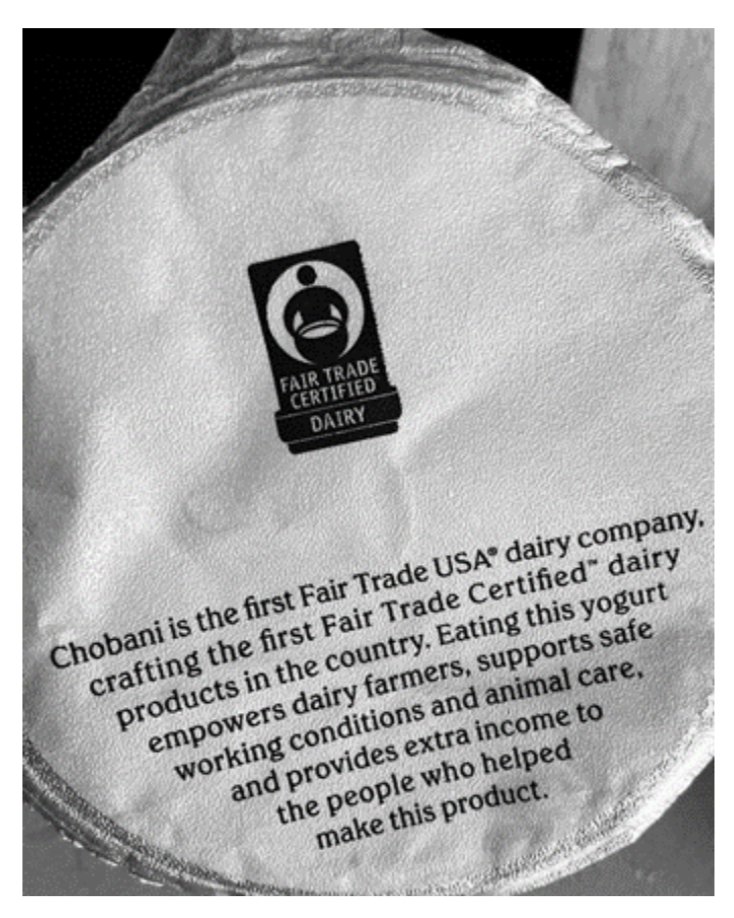 The 12-page lawsuit alleges that although Chobani touts in its marketing and advertising and on product labels its commitment to “Fair Trade,” i.e., aiding producers in growing countries to achieve sustainable and equitable trade relationships, the “Fair Trade Certified Dairy” label that appears on certain items, including its non-fat plain Greek yogurt, is not backed by “any requirements for worker organizations or unions to be represented or have a majority voice on either their standards-setting council or governance or advisory board.”

According to the complaint, nonprofit groups such as Fair World Project, Migrant Justice and Workers’ Center of Central New York have described the Fair Trade USA-created “Fair Trade Certified Dairy” standard used by Chobani as “a sham process” and “an exercise that doesn’t reflect the needs and values of workers.” As such, the lawsuit alleges, consumers who’ve purchased Chobani’s non-fat plain Greek yogurt have been deceived into buying a product that’s worth materially less than represented by the company.

“Had Plaintiffs and proposed class members known the truth of the Fair Trade Certified Dairy—that it failed to assure a minimum of basic worker protections, they would not have bought the Product or would have paid less for it,” the case out of New York says.

The allegations in the complaint lean in part on a 2017 report, titled “Milked: Immigrant Dairy Farmworkers in NY State” and compiled by the Workers’ Center of Central New York and the Worker Justice Center of New York, that the case says served as the basis for an extended campaign calling on Chobani to address conditions in its supply chains. According to the lawsuit, Chobani, rather than recognize and support the right of all workers in its supply chain to unionize, instead created its own “Milk Matters” campaign without the input of workers.

The case, citing a May 2021 Fair World Project report, contends that although Fair Trade USA is a member of ISEAL, an international organization that aims to drive efforts toward tackling sustainability issues, its “flawed development process does not adhere to ISEAL recommendations in several key regards,” mainly concerning the lack of input from stakeholders. Moreover, the Fair Trade Certified Dairy program has been criticized for its attempt to apply a “one-size-fits-all approach to their agricultural standard,” the suit states.

“According to reports, even after the ‘Fair Trade Certified Dairy’ label began appearing on Chobani products in spring 2021, a final dairy standard had not been released,” the lawsuit says.

Per the complaint, Fair Trade Certified Dairy standards have been critiqued as filled with “loopholes that leave out the most at-risk workers on dairy farms.” Central to this issue, the lawsuit says, is Fair Trade USA’s dairy amendment’s emphasis on at-will employment for farm workers.

“The ability to fire workers for no cause—while lawful—‘has been highlighted by labor advocates in the U.S. as an obstacle to workers’ organizing,’” the complaint says, citing the Fair World Project report.

The lawsuit argues that Chobani overall attempts to “fairwash” its concern for supply chain workers while labeling its products with a “watered-down standard which fails to offer the same level of worker and environmental protections.”

Reasonable consumers rely on companies to honestly identify and describe the components, attributes and features of a product and the process by which the item was made, the case rounds out. Chobani was able to sell more of its non-fat plain Greek yogurt, and at higher prices, than it would have absent its use of the “Fair Trade Dairy Certified” standard, the lawsuit alleges.