A proposed class action contends that consumers have been misled into thinking Cracker Barrel-brand Extra Sharp Yellow and Extra Sharp White Cheese bites with butter crackers are made with an appreciable amount of butter. 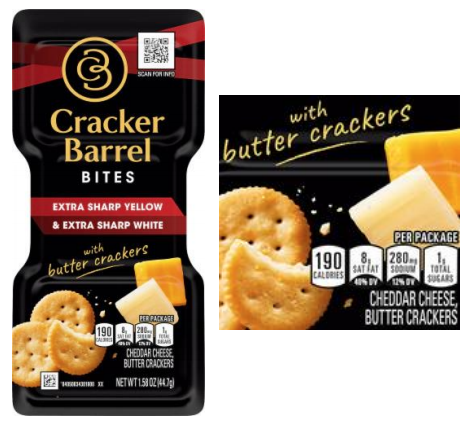 The 13-page case, filed against defendant Kraft Heinz Food Company on July 11, says that the crackers, in truth and contrary to what buyers expect, are made not with butter but with vegetable oils. As such, the lawsuit asserts, consumers have paid for a product that is worth “materially less than its value as represented” by Kraft Heinz.

“The name ‘Butter Crackers’ is misleading because the Product does not contain any butter and uses vegetable oils—canola and palm oil—in its place,” the suit says.

When consumers see a food represented as “butter crackers,” they understand butter to be the product’s defining feature, the case begins. More specifically, the suit parses that “butter cracker” does not mean “a cracker made with some butter” but a cracker made “only or predominantly” with butter, where butter is capable of being used. Per the complaint, consumers prefer butter to cheaper, chemically produced vegetable oils for reasons that include the absence of trans fats, its natural composition, nutrient content, taste and texture.

Buyers who view the labeling of the Cracker Barrel bites are unaware that the product contains canola and palm oil in place of butter, making Kraft Heinz’s “butter crackers” representation misleading, the suit claims. According to the complaint, Kraft Heinz did not have to label the product “butter crackers” but chose to do so “since this is more enticing to consumers.”

All told, Kraft Heinz has sold more of the Cracker Barrel bites, and at higher prices, than it would have absent its apparent misrepresentation of the “butter crackers,” the lawsuit alleges.