A lawsuit alleges Lenovo displays false “regular” prices on its website in order to deceive consumers into believing they are buying products at a discount.

A proposed class action alleges Lenovo has displayed false “regular” prices on its website in order to deceive consumers into believing they are buying certain products at a discount.

According to the lawsuit, Lenovo’s false reference prices have the effect of artificially inflating the perceived value of its products, and entice consumers into making purchases they otherwise would not have made. The case claims this practice violates California law, under which retailers are prohibited from advertising an item’s former price unless it was the “prevailing market price” during the previous three months.

Lenovo, in reality, does not sell its products for the advertised “regular” price listed on its website, and instead fabricates the amount in order to trick consumers into believing they are “getting an incredible deal,” the suit alleges. Per the case, the “pervasive, ongoing nature” of this deceptive marketing practice demonstrates that it is “central to [Lenovo’s] overall marketing strategy.”

The lawsuit states that Lenovo, described in the complaint as the largest computer manufacturer in the world, has no physical retail stores in the U.S., and instead sells its products directly to consumers through its website. According to the case, Lenovo often advertises a “regular” price for its products, which, prior to August 25, 2021, was represented either as the “Web Price,” “Base Price” or as a strikethrough price such as $1,199.99. Below each regular price, Lenovo listed a sale price represented as the “After Instant Savings” or “After eCoupon” price and accompanied by a dollar amount or percentage purportedly saved, the suit relays. While Lenovo redesigned its website on August 25, “the substance of its deceptive pricing scheme remains the same,” the case alleges.

The lawsuit claims, however, that the “vast majority” of Lenovo’s regular prices are false and deceptive because they do not represent the prices at which the products were actually sold “for a reasonably substantial period of time.” For example, the complaint states, although Lenovo advertised in June 2021 that the regular price of its ThinkPad X1 Carbon Gen 8 Intel (14”) laptop was $2,279 and offered it for sale at a 40 percent discount with a purported sale price of $1,367.40, the laptop was “rarely, if ever,” sold for “anywhere near” the advertised regular price, as purportedly demonstrated in the pricing table below: 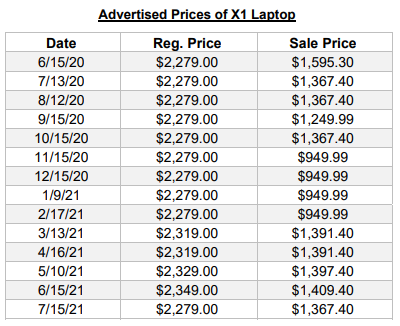 The case claims Lenovo’s false reference pricing scheme is “so deeply ingrained in its marketing strategy” that when the retailer increases the sale price of an item, it also increases the regular price in order to maintain a certain percent-off discount. In the example above, while Lenovo increased the sale price of the X1 laptop between April and June 2021, the advertised “regular” price of the computer was also increased to maintain a 40 percent discount, the suit says.

“The parallel increases to the sale price and regular price demonstrate that the regular prices did not reflect the actual price at which Lenovo formerly sold the X1 Laptop,” the complaint reads. “Rather, Lenovo deliberately inflated the regular price to convey a false sense of savings to potential customers—here, 40% off.”

According to the suit, pricing data collected by the plaintiffs’ counsel over the course of more than three months demonstrates that Lenovo’s products are on sale roughly 75 to 80 percent of the time.

The case goes on to claim that Lenovo further perpetuates this scheme by advertising that the sale prices are available for a limited time, and thus pressures consumers into making a purchase in order to take advantage of the purported offer. Through “eCoupons,” Lenovo misleads consumers into believing they must act before the supposed coupon expires when, in reality, Lenovo simply updates its coupon codes and continues to sell the product at the same “discounted” price, according to the suit. The case claims the defendant’s coupon codes, which frequently incorporate a reference to a specific month, holiday or sale, are “a sham” and merely a means to increase sales.

Likewise, the suit says, the company’s representation that a certain percentage of coupons have already been claimed, or that advertised discounts will end at a certain time, is similarly false and misleading given Lenovo simply continues to sell its products “at the same price and discount” whenever a sale purportedly expires.

The lawsuit seeks an injunction ordering Lenovo to cease its allegedly false and deceptive pricing scheme as well as damages for certain consumers who were purportedly injured thereby.