The plaintiff in the case detailed on this page voluntarily dismissed her claims without prejudice on January 27, 2022.

No further details were provided in the dismissal notice.

A proposed class action filed late last week claims the hinges in certain HP laptops are defectively designed and can break after only months of use.

The 60-page lawsuit claims the defect—which allegedly affects the Envy, Envy 360, Pavilion, Pavilion 360, HP 14, HP 15 and HP 17 laptops sold in or after 2017—is caused by defendant HP Inc.’s decision to anchor the devices’ hinges with “poorly designed parts constructed from weak plastic.” According to the suit, opening and closing the laptops in the course of ordinary use can cause the anchors to separate from the device, snap or otherwise fail, rendering the computers “useless” and unable to be used for their intended purpose.

The case claims HP knew about its laptops’ propensity to break yet concealed the alleged defect from buyers, who, as a result, purchased computers that “became practically unusable after just months of use.” Moreover, HP, the suit says, has responded to customer complaints by either blaming the broken hinges on user error and refusing to provide free repairs, or repairing the laptops with similarly defective hinges.

Per the complaint, consumers would not have purchased the HP laptops, or would have paid substantially less for the devices, had they known the computers’ hinges would fail after only a short time.

What Does the Lawsuit Say the Problem Is With the Laptop Hinges?

The case claims that although HP marketed its laptops as “reliable” and “designed for long-lasting performance,” these representations are far from the truth.

According to the complaint, the Envy, Pavilion and HP 14, 15 and 17 laptops—some of which can be converted into tablet form with the screen folding 360 degrees—are plagued by defective hinge components that are unable to handle the stress of opening and closing the laptop and holding the screen in one of the devices’ advertised positions. The lawsuit claims the laptops’ hinges are connected using brass screws held in place by “fragile plastic” that can easily wear and crack with normal use. When the hinge anchors “crack, snap, separate, break or otherwise fail,” the brass screws cannot reseat into the anchors absent an adequate fix, the suit says. 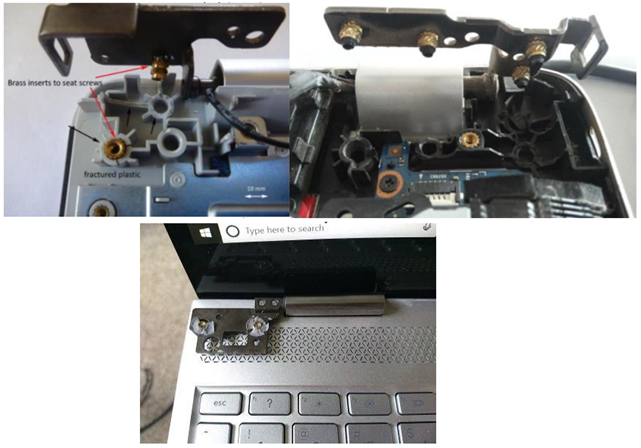 The case says users of the allegedly defective laptops have reported “crunching sounds” when opening the devices and noticed plastic debris falling out of their computers. When the laptop hinges break, the computer becomes difficult or impossible to use given it cannot be transported, opened and closed, or adjusted, the lawsuit relays.

According to the suit, thousands of HP laptop owners have complained about broken hinges on HP’s online forum.

Indeed, the case claims HP knew “or was reckless in not knowing” about its laptop hinges’ propensity to break yet concealed the devices’ defective nature from the public.

The plaintiff, a Florida resident, says she purchased an HP 17-by2053cl in October 2020 and, within seven months, heard a “crunching sound” when opening her laptop. According to the complaint, the issue continued to worsen until the computer became impossible to use properly without the case further separating.

The plaintiff says she checked HP’s support forums and found a number of posts from other users who reported that HP had refused to repair or replace their devices, sometimes blaming the defect on user error. Another post allegedly stated that HP’s service provider, Ubreakifix, had informed a user that a repair would be more expensive than buying a new computer.

A state-specific subclass has also been proposed for those who purchased their laptop in Florida.

There’s usually nothing you need to do to join a class action when it’s first filed. If the lawsuit moves forward and settles, that’s when class members, i.e., those mentioned in the previous section, should receive notice of the settlement and be able to claim their share.

In the meantime, one of the best things you can do is to stay informed. Check back to this page for any notable updates, but keep in mind that it often takes months or years for a class action to be resolved.

You can also get class action news and settlement information sent straight to your inbox by signing up for ClassAction.org’s free weekly newsletter here.