December 8, 2021 – Claims Sent to Arbitration for All but Two Plaintiffs

The claims of 18 plaintiffs in the case detailed on this page have been sent to arbitration after the court found that a valid arbitration agreement existed.

According to a November 29 opinion, U.S. Magistrate Judge Andre M. Espinosa found that most of the plaintiffs had agreed to Samsung’s terms and conditions, which contained an agreement to arbitrate any disputes outside of court, when they activated and began using their phones. Judge Espinosa held that Samsung had conspicuously disclosed the existence of the arbitration agreement in three places—on the outside of the product box, in a pamphlet inside the box and in the onscreen setup process for each phone—allowing the plaintiffs a reasonable chance to opt out.

“The notice provided is not only conspicuous, but also provides consumers a reasonable opportunity to review the Arbitration Agreement and consider whether to take an affirmative act negating assent to the terms of purchase,” the judge wrote.

The two remaining plaintiffs had opted out of the arbitration agreement, according to the opinion. While Samsung argued that their claims should be stayed (i.e., put on hold) pending the results of arbitration, Judge Espinosa disagreed, finding that a stay would delay the two plaintiffs from pursuing relief, hinder their right to litigate their claims and “work a clear disadvantage on them.”

The 107-page lawsuit says the so-called “shattering defect” became apparent just days after the March 2020 release of the “camera-focused” Galaxy S20, when a consumer reported online that their camera glass, which encases multiple lenses, had shattered while in their pocket. As of the date of the suit’s filing, “countless” complaints have been posted to Samsung’s community website and elsewhere online about the spontaneous shattering defect, the case says, stressing that the Galaxy S20’s camera functionality was a critically important selling point for the devices.

According to the case filed in New Jersey federal court, the shattering issue is a “known defect” that has also plagued previous Samsung smartphone models, including the Galaxy S7, S7 Edge and S7 Active smartphones, which were the subject of a class action lawsuit filed in Wisconsin in January 2017 and dismissed in October 2019. When the defect manifests, a tell-tale “bullet hole” pattern usually appears, according to images included in the complaint: 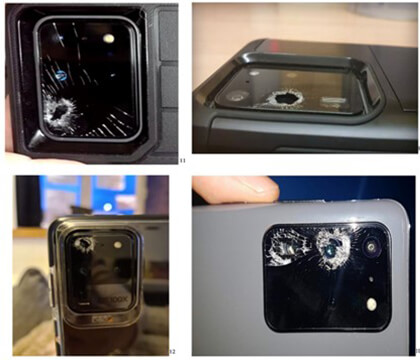 The plaintiffs, Galaxy S20 owners from South Carolina, Washington, Ohio, Virginia and New York, allege Samsung, despite receiving a vast number of complaints about the issue, has “consistently denied responsibility” for the problem and instead shifted the blame onto consumers while “refusing” to repair the devices or offer refunds. The plaintiffs say Samsung has sometimes charged “an exorbitant amount of money” for consumers to send back a defective Galaxy S20, with some buyers claiming they were told by the company that they had voided their warranty by reporting the problem.

Want the latest updates on this lawsuit? Sign up for ClassAction.org’s free weekly newsletter here.

“Samsung only recently admitted that a pattern of complaints exists and that the issue is not the consumer’s fault,” the complaint reads. “Yet Samsung has not recalled the phone and continues to deny warranty claims.”

Compounding Samsung Galaxy S20 owners’ frustrations, the lawsuit says, is the fact that the defendant released the phone at the onset of the COVID-19 pandemic as the nation shouldered lockdowns, social distancing and job losses. Those who paid an “exorbitant price” for the Galaxy S20 expecting a professional-grade camera experience, “and perhaps more for a protective case,” have been left with a smartphone whose camera functionality has been diminished or disabled “just at the time they needed it the most,” according to the case.

Moreover, the pandemic has caused Galaxy S20 buyers to hit roadblocks in securing repairs and replacements as they have been limited in how and when they can bring their devices into brick-and-mortar stores and face a shortage in available stock.

Given its representations that the Galaxy S20, which retails for up to $1,600, was equipped with a high-quality, professional camera, Samsung, the case contends, was obligated to disclose that “the exact opposite was true,” namely that its newest smartphones were hampered by a known hardware defect that manifests “immediately upon use.” Allegedly, the defect can render the camera unusable and limit the phone’s overall functionality. Moreover, the lawsuit says some Samsung Galaxy S20 buyers, including one of the plaintiffs, have been injured as a result of the glass-shattering defect.

“No Plaintiff or reasonable consumer would have purchased or leased these smartphones and/or paid the price they paid for these smartphones had they known of the glass shattering defect,” the complaint says. “Samsung omitted information about this material defect and has completely failed its customers by continuing its pattern of putting profits over safety.”

According to the lawsuit, Samsung’s Galaxy S20 and S20 Ultra devices are encased in purportedly damage- and scratch-resistant “Gorilla Glass.” Per the suit, the Galaxy S20 and S20 FE have three back camera lenses while the S20 Ultra has an even larger back camera module with an additional lens. The Galaxy S20 devices were marketed by Samsung as having high-resolution, professional-grade cameras, with the S20 Ultra capable of capturing ultra-wide, wide-angle, telephoto and DepthVision shots with its four lenses. The video quality of the devices’ cameras was also prominently included in Samsung’s marketing of the smartphones, the lawsuit says. Within days of the Galaxy S20’s release last year, however, consumers began to post complaints about the glass module shattering, the case says. Per the suit, this breakage, in addition to diminishing the phones’ overall value and utility, harms the camera’s ability to take high-quality photos and videos.

Sharing blame for the apparent glass-shattering defect is Samsung’s use of “Gorilla Glass,” manufactured by non-party Corning, for the “unreasonably fragile” Galaxy S20, the lawsuit claims. According to the complaint, Gorilla Glass covers the back, outward-facing camera lens and is prone to shattering spontaneously during normal use and without the application of any external force. The glass can also shatter even if a consumer’s phone is housed within a protective case, the suit says.

Although Gorilla Glass is designed to be strong and has weathered several drop tests without the kind of shattering that apparently plagues the Galaxy S20, the lawsuit says that Samsung’s move “away from conventional glass, towards supposedly stronger glass created through the use of heating glass to high temperatures,” has led to incidents of spontaneous glass breakage.

The lawsuit stresses that a similar glass-shattering issue plagued Samsung’s Galaxy S7 smartphone, for which customers also posted stories online of their camera lenses spontaneously shattering. Per the case, Samsung eventually acknowledged the “unexplained issue” but stopped short of providing a solution and dismissed the shattering reports as isolated incidents.

Samsung has been aware and possessed exclusive knowledge of the camera-protecting glass screens’ propensity to shatter since at least 2016, in part due to repair records, online complaints, blogs monitored by the company, and industry sources, the complaint alleges.

As far as user complaints go, Samsung, the suit claims, has had a “dismal” response to the apparently widespread issue. The suit goes so far as to allege Samsung has deleted consumer complaints, including an open letter to the company about the camera glass problem, and responded to one complaint with the claim that camera glass breakage was caused by “pressure buildup beneath the glass.”

Despite its acknowledgement of the Galaxy S20 glass-shattering issue, Samsung has failed to initiate a recall, is denying warranty claims, and has otherwise offered “no meaningful solution to the issue,” the lawsuit says. Worse for consumers, Samsung has allegedly charged a premium price to merely look into the glass-shattering defect if the individual has not paid for the company’s warranty program, the complaint claims:

Samsung reportedly requires that a consumer pay $400.00 to send the phone back to investigate the issue if the consumer did not pay purchase [sic] ‘Samsung care,’ and even consumers who paid extra for this product protection plan are required to pay $100.00 to return their phones.

For consumers in the best of times, this is cost-prohibitive, and certainly more so during a pandemic.”

Those who’ve paid to send their phone to Samsung have often received in return “another defective S20,” the suit alleges, claiming that restrictions in replacement stock and the amount of time the defendant will keep a consumer’s phone have added to proposed class members’ headaches.

“Consumers are left with a broken phone that is greatly reduced in value, with an unusable camera, or one with just partial functionality,” the lawsuit says.

According to the lawsuit, Samsung “publicly indicates” that the box for the Galaxy S20 does not contain any terms and conditions. The suit says the defendant’s “quick start” guide to setting up the smartphones, which is also available for download online, also contains “no terms and conditions whatsoever.” The plaintiffs allege, though, that Samsung has attempted to “actively hide” its terms and conditions from buyers.

The case, highlighting the fact that the company used to keep its terms and conditions in a guidebook that came with its smartphones, alleges Samsung has intentionally removed any mention of terms and conditions from the product boxes and any materials contained therein.

As the lawsuit tells it, Samsung’s mention of an arbitration provision on only the bottom of the product boxes is not sufficient to adequately inform buyers that they’re signing away their rights in the event of a dispute [emphasis ours]:

The lawsuit looks to cover all persons or entities in the United States who bought or leased one or more Samsung Galaxy S20, Galaxy S20 FE or Galaxy S20 Ultra smartphones.

The case also looks to cover “subclasses” of consumers and entities in New York, Ohio, South Carolina, Virginia and Washington who fit the same criteria.

How do I participate in the class action?

Generally speaking, there’s nothing you need to do to “join” or be considered “included” in a class action lawsuit. These types of lawsuits almost always take some time to work their way through the legal system, usually toward a settlement, dismissal or, in some instances, arbitration outside of court. This means it might be months or years before the time comes for those who might be considered a part of the “class” to submit claims for whatever compensation the court deems appropriate—and that’s only if a case ends in a settlement.

You can learn all about how class action lawsuits work here.