A proposed class action filed on Wednesday claims certain Dodge Grand Caravan and Chrysler Town & Country minivans were built with a defective door latch system that causes the vehicles’ sliding doors to either fail to lock or get stuck in the locked position.

The alleged locking problems, according to the suit, are caused by a defective actuator that prevents the doors from operating properly and frequently leads to drivers having to pay out of pocket for costly repairs to the door latch assemblies.

Aside from causing “aggravating circumstances” and financial burden, the allegedly defective door latches in the Grand Caravan and Town & Country also present a significant safety risk, the lawsuit stresses, noting that young children especially could be endangered if the doors open while the car is in motion. In other situations, the suit relays, the doors could remain locked when passengers are trying to get out, which would be particularly concerning in the event of an accident.

The case claims the alleged door latch defect occurs regardless of whether the car is on or off and can subject a vehicle to potential crime, including theft, or drain the car’s battery and leave its occupants stranded.

All told, the lawsuit alleges defendant FCA US LLC has known about the apparent problems with the Grand Caravan and Town & Country’s door locks yet has failed to properly warn buyers, recall the cars or pay for repairs when the defect manifests.

What Does the Lawsuit Say Is Causing the Alleged Door Lock Problems?

According to the suit, the issues with the minivans’ sliding doors are caused by a defective door actuator. As the case tells it, the actuator (pictured below) is an electric motor that controls the locking and unlocking of the cars’ doors. 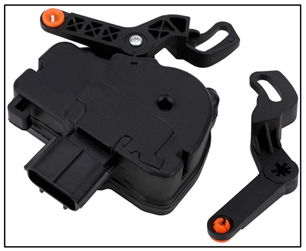 In the Dodge Grand Caravan and Chrysler Town & Country vehicles, the actuator fails prematurely and causes the sliding doors to fail to lock or unlock with the car’s electronic controls or manual attempts, the suit says.

Moreover, if the actuator is not functioning properly, it can lead to other problems with the minivan, the lawsuit relays. For example, the case says, when a door sensor communicates to a vehicle’s body control module (BCM) that a door is not properly closed, the vehicle’s interior dome light will continuously illuminate, the door chime will go off, the alarm system will not properly function and the “door ajar” indicator light in the instrument cluster will light up. In this situation, a vehicle will remain unlocked even if the car is in motion and regardless of any attempts by the driver to lock the minivan, according to the suit.

In other cases, the complaint says, a defective actuator could cause a car’s doors to remain locked despite the driver’s attempts to unlock the vehicle. This could pose a problem in the event of an accident or other emergency in which passengers need to quickly escape the car, the suit adds.

According to the lawsuit, a defective actuator can cause the entire door latch assembly to malfunction, warranting costly repairs. The suit says the defect typically manifests outside the minivans’ warranty period, meaning drivers are left to pay for the repair or replacement of the door latch assembly at their own expense.

The lawsuit claims FCA is well aware of the problems with the Dodge Grand Caravan and Chrysler Town & Country door latches through a vast number of customer complaints, dealership repair records, reports from the National Highway Traffic Safety Administration (NHTSA) and various other sources, yet has refused to take responsibility for the alleged manufacturing defect.

“FCA failed to adequately research, design, test, and/or manufacture the electronic door latch system before warranting, advertising, promoting, marketing, and selling the Class Vehicles as suitable and safe for use in an intended and/or reasonably foreseeable manner,” the complaint charges.

The suit claims FCA’s apparent failure to address the issue is especially concerning, particularly for families with children, given the significant safety risks associated with minivan doors that fail to properly function.

The case seeks to represent anyone in the U.S. who currently or formerly owned or leased one of the aforementioned Dodge Grand Caravan or Chrysler Town & Country vehicles.

Alternatively, the case proposes to cover anyone in Maine who fits the same criteria.

Generally speaking, there is nothing you need to do to join the lawsuit. If the case moves forward and settles, that’s when those affected, i.e., the “class members,” would be notified of their opportunity to file a claim.

In the meantime, one of the best things you can do is to stay informed. Check back to this page for updates, or sign up for ClassAction.org’s free weekly newsletter here.