A proposed class action lawsuit filed this week paints a grim picture of the “potentially hazardous” state of on-base military housing at Fort Bragg, a U.S. Army base in Fayetteville, North Carolina.

According to the case, the base’s private sector housing management company, Corvias Group, LLC, with the help of several affiliates, its founder and a manager, has knowingly leased “substandard homes” to members of the U.S. military while charging “grossly excessive fees,” concealing defects from tenants, and keeping “intentionally misleading” maintenance records in an effort to hide tenants’ dissatisfaction.

Filed in North Carolina federal court, the 64-page complaint highlights the living conditions of three Army service members and their families, whose stories include nightmarish accounts of collapsed ceilings, mold infestations and threats of lead poisoning—hazards the case claims are a widespread issue among those living at Fort Bragg.

The problems highlighted in the lawsuit can be traced back to 1996, when Congress established the Military Housing Privatization Initiative (MHPI) to “stimulate private sector financing of military housing construction and revitalization projects,” according to the case.

While the initiative was intended to “improve the quality of life for soldiers and their families” by attracting private capital and developers for housing construction on military bases, the lawsuit claims the MHPI presented a unique opportunity for companies such as the defendants to score lucrative government contracts with little oversight or accountability. From the suit:

Privatizing U.S. military housing was supposed to protect service members’ families. The military knew hazards lurked in its housing, and private companies knew that when they took over.”

Under the MHPI, the suit says, service members housed on military bases are required to pay the full amount of their “base allowance housing” rate to the management company as rent, “even when conditions within the rental homes merit no payment whatsoever.” Per the lawsuit, private landlords such as the defendants “prey on” service members’ fears of reprisal, knowing “a single call” to a tenant’s chain of command can “rectify any delinquency.”

According to the case, the defendants’ unique relationship with the military, coupled with tenants’ “relatively weaker economic position,” military status, and lack of military benefits associated with moving, have effectively allowed the companies to “hold [the plaintiffs] hostage in their leases” until they are stationed elsewhere.

The suit stresses that living conditions at military bases following privatization have been the subject of investigation and federal scrutiny in recent years, citing the following examples:


According to the case, Corvias’s conduct at Fort Bragg is no exception.

The lawsuit states that Corvias “[u]nsurprisingly” won the Fort Bragg contract in 2003 after a $2.8 million lobbying effort on issues related to military housing.

On August 1, 2003, the suit explains, defendant Bragg Communities signed a 50-year ground lease with the United States of America to upgrade military housing at Fort Bragg, the most populated military base in the U.S. with nearly 6,500 family homes.

Under the terms of the lease, Bragg Communities agreed to “faithfully observe and comply with” all applicable federal, state and local laws, as well as keep the leased property in “good order and in a decent, safe, and sanitary condition” at its own expense, per the complaint. Additionally, the suit says, Bragg Communities agreed to manage and maintain the military housing neighborhoods in a way that was “consistent with the standard of a market rate residential rental development” in the Fayetteville area.

“This is to include maintenance and repair in accordance with military, federal, state and local codes to ensure that all of the houses are in a condition at all times reasonably acceptable to the owner, including, but not limited to, cleaning, painting, decorating, plumbing, electrical, HVAC, appliances, carpentry, grounds-care, and such other maintenance and repair work as may be necessary,” the lawsuit reads.

Despite their obligations under the terms of the lease, the defendants have failed to properly maintain the housing at Fort Bragg and have gone so far as to conceal mold, structural wood rot, moisture problems, lead-based paint, and other hazards from tenants.

The first plaintiff says he moved to Fort Bragg in August 2016 with his wife and two sons. At the time he signed his lease, the defendants failed to inform him that his home was “filled with mold, lead based paint, structural wood rot and overall disrepair,” the lawsuit states.

According to the complaint, the plaintiff submitted his first repair request about a month after moving in due to water damage in his son’s bedroom. Corvias took weeks to respond, the case says, and only painted over the damage rather than fix the problem.

In the following months, the suit states, the plaintiff and his family faced water leaks, an ant infestation, cracking walls, and an HVAC system failure, as well as black mold and the release of lead-based paint after attempted repairs.

“Almost without exception, repairs were tardy and insufficient,” the complaint reads.

The second plaintiff’s story includes a total of 33 repair orders and a “catastrophic housing defect” that the man says could have killed his two-year-old daughter.

According to the lawsuit, a shoddy roof repair job that was put off by Corvias for months resulted in further damage that ultimately caused a worker to fall through the rotting roof and an interior ceiling to collapse while the plaintiff’s family was in the room. 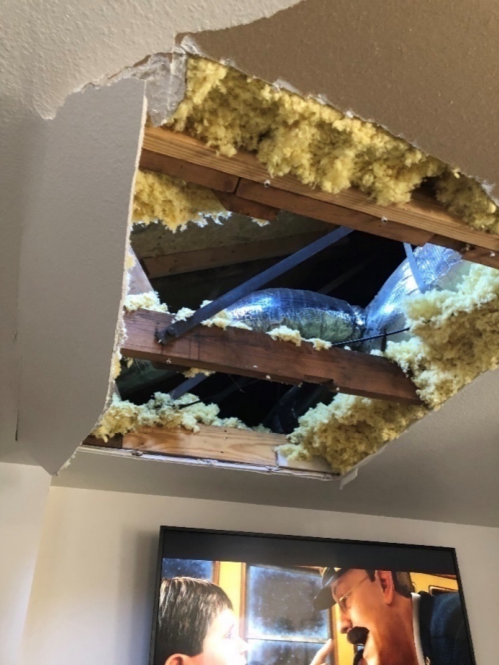 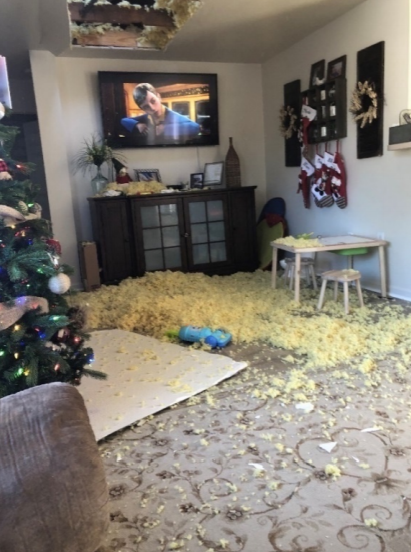 Aside from the roof collapse, the second plaintiff says his family faced issues with mold and water damage that were never fully addressed by Corvias.

The third plaintiff’s story echoes many of the problems faced by the other two plaintiffs—namely, “pervasive mold,” delayed responses, shoddy repairs, and a near-total denial that any problems existed.

According to the complaint, a repair worker showed the plaintiff’s wife that her attic was “soaked with water,” but informed her that he would be fired if he told her mold was present.

Outraged, the plaintiff demanded that Corvias repair all the issues in the home, after which the case suspects that a Corvias manager, who is named as a defendant in the suit, called to have the worker fired.

The manager then visited the plaintiff’s residence and “insisted there were no defects,” the case states. The suit claims that although the plaintiff’s wife demanded the home be tested, the manager informed her that Corvias no longer tests for mold in homes at Fort Bragg and ultimately suggested that she move off base if she was unable to trust Corvias.

The lawsuit alleges that the defendants “systematically” breached their contractual obligations by concealing from the plaintiffs and other Fort Bragg residents potentially harmful environmental and structural housing defects, including the lack of effective moisture and air barriers between exterior cladding and wall cavities that was present “in all homes.”

Moreover, the suit argues that the defendants were well aware of, yet concealed, the presence of lead-based paint in the homes at Fort Bragg despite being obligated to follow a detailed process for identifying and managing lead hazards.

Even further, the case claims that in the days following a December 2018 Reuters’ exposé detailing “abysmal living conditions” at Fort Bragg, Corvias threatened tenants to sign new leases or be forced to pay a $100 fee each month to continue their month-to-month arrangements.

The lawsuit claims the plaintiffs would have never entered into leases with the defendants had they been aware of the defects in Fort Bragg’s housing.

The lawsuit looks to represent the following two proposed classes:

Can I Join the Lawsuit?

Most of the time, there’s nothing you need to do to join a class action lawsuit. If the case moves forward and settles, anyone affected should receive notice of the settlement and would then be told how to claim whatever compensation the court deems just.

In the meantime, you can keep up with class action news by signing up for ClassAction.org’s newsletter here.