United States military service members who live or lived with their families at Tampa, Florida’s MacDill Air Force Base have been exposed to “widespread and well-known” mold growth and suffered myriad health problems as a result, a proposed class action says. Filed in Florida federal court, the 61-page complaint links the mold epidemic to the failure of the defendants, six private companies that own and/or operate the housing facilities at MacDill Air Force Base, to meet even “the most basic standards” in providing military members and their families with “safe, quality, affordable [and] well-maintained” housing.

At the heart of the lawsuit lies the privatization of military housing operations nationwide. The case explains that with roughly 99 percent of the housing on U.S. military bases contracted out to private entities like the defendants, there’s significant profit to be made from providing living space to our armed forces.

Pursuant to a contract with the U.S. Air Force under the Military Housing Privatization Initiative (MHPI), the defendants—The Michaels Organization, Michaels Management Services, Interstate Realty Management Company, AMC East Communities, Clark Realty Capital and Harbor Bay at MacDill—own and are tasked with operating and maintaining housing at MacDill Air Force Base, home to the 6th Air Mobility Wing of the Air Force’s Air Mobility Command. A component of the 1996 National Defense Authorization Act, the MHPI, the case explains, was intended to allow companies such as the defendants to provide military personnel and their families with “safe, quality, affordable [and] well-maintained housing.” The companies that contracted to work on MacDill Air Force Base, however, have “failed miserably” in providing adequate on-base living quarters, leading to problems with not only the safety and soundness of the housing itself but the health and welfare of military families, according to the lawsuit.

Given the gravity of their national security responsibilities, military personnel at MacDill can ill afford to have ailments linked to mold exposure on their plates as well, the suit asserts. From the lawsuit:

The severe toll on United States service members from living in substandard, mold-infested housing, cannot be overstated. These men and women who serve our country and keep us safe, and their children, deserve to live in safe, clean, and uncontaminated housing. It is difficult for United States service members to focus on their critical role of keeping our country safe when they are themselves suffering from health problems and worried about the health and safety of their spouses and children.”

Nowhere is the defendants’ failure to adequately upkeep housing at MacDill Air Force Base more evident than in the endemic mold issues that, the plaintiffs say, have led to medical concerns spanning “pulmonary and respiratory problems, sinusitis, enlarged lymph nodes, allergies, headaches, and rashes.” Worse, the plaintiffs—a Master Sergeant in the U.S. Air Force, an Army Special Forces Officer, two Air Force Staff Sergeants, and an Army Chief Warrant Officer Three and their spouses—claim that those affected by mold exposure at MacDill have “little or no recourse” to address the epidemic in part because rent is deducted automatically as a “basic housing allowance,” leaving no opportunity to withhold payment in exchange for proper maintenance or remedies to systemic issues. Even when the plaintiffs and other proposed classed members have been forced to spend lengthy periods of time in motels, hotels or other temporary housing, the defendants have continued to automatically withdraw their rent, the lawsuit claims.

The suit proposes that the defendants have known of the pervasive mold issues at the base since at least 2016.

Cited in the lawsuit is a 200-page May 2019 report from the Military Family Advisory Network (MFAN), a charity group that connects military families. To compile the report, titled “Living Conditions of Families in Privatized Military Housing,” MFAN conducted surveys of service members scattered across a number of military installations, including MacDill Air Force Base. According to the lawsuit, more than 54 percent of the 105 MacDill service personnel surveyed by MFAN reported problems with mold. More generally, across all 16,779 individuals surveyed by MFAN, 55.53 percent reported having “a negative or very negative experience with privatized military housing,” according to the group’s website. Those surveyed pointed specifically to instances of “black mold, lead paint, faulty wiring, poor water quality, pesticides” and an array of insects and vermin within and around privatized military lodging.

The complaint relays that mold issues have plagued MacDill Air Force Base to such an extent that the U.S. Air Force penalized the defendants in 2019 by cutting funding the companies received through a “performance incentive fee.” Colonel Stephen Snelson, Commander of the 6th Air Refueling Wing at MacDill, noted that the defendants’ fees were cut as a direct result of the mold remediation complaints from proposed class members, the lawsuit adds.

The plaintiffs argue that even “widespread news coverage” and clear recognition of the pervasive mold problems at MacDill has done nothing to sway the defendants into addressing the issue in any way other than a “piecemeal, incomplete, and ineffective basis.” According to the lawsuit, the companies have “done little to accept responsibility” for the mold situation, continuing to collect rent while wielding a slumlord-like mentality reliant on cosmetic solutions to infrastructural housing problems.

Instances in which the defendants attempted to remediate the mold problems at MacDill saw the companies use “inadequate and shoddy” fixes, addressing only areas in which mold could be seen visibly by “simply painting over moldy or wet areas,” the lawsuit claims. In other instances, the case continues, obvious mold areas were sanded down without proper remediation measures in place. The plaintiffs say this caused airborne mold spores to disperse throughout proposed class members’ homes, “contaminating the entire residence and personal property” of the U.S. military personnel and their families.

More disturbingly, the defendants allegedly let at least one mold infestation go untreated for so long that toxic mushrooms grew out of the floor and carpet of one proposed class member’s home. From the complaint: 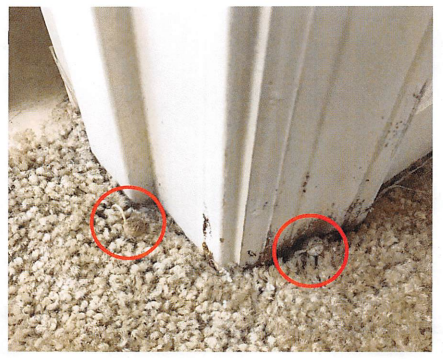 According to the plaintiffs, it’s common for weeks to pass from when mold problems are first reported to the defendants and when the companies actually schedule a maintenance appointment and begin remediation. In the time it takes the defendants to respond to a mold complaint, the problem worsens and spreads, with additional mold growth occurring behind walls and under subflooring where it can’t be seen by inhabitants, the suit adds.

Additional images included in the lawsuit display mold growth in the plaintiffs’ HVAC vents, behind vent covers, in closets, underneath baseboards and flooring, and underneath carpets:

Who Does This Lawsuit Look to Represent?

The lawsuit looks to cover a class of all current and former military personnel and their families who resided in housing at MacDill Air Force Base that was owned, maintained, managed or operated by any of the defendants.