A proposed class action lawsuit filed on Monday claims 2017-2018 Chrysler Pacifica plug-in hybrid electric vehicles (PHEV) are plagued by a “widespread defect” that can cause them to explode and catch fire, even when turned off.

According to the case, defendant Fiat Chrysler Automobiles US, LLC (FCA) issued a recall of the minivans in February 2022 after an internal investigation revealed that at least 12 Chrysler Pacifica plug-in hybrids had spontaneously caught fire. The 39-page complaint includes the following photos as examples of the Chrysler Pacifica fires: 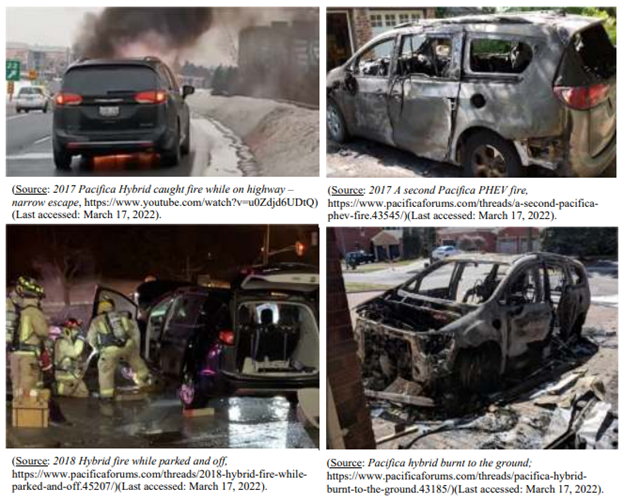 FCA has not yet nailed down the root cause of the issue and, in the meantime, has advised Chrysler Pacifica drivers to park outside and not charge their vehicles, the case relays.

The plaintiff in the lawsuit, a Chula Vista, California resident who bought a new Chrysler Pacifica in February 2018, claims he and other Pacifica drivers have since been “burdened with vehicles that do not perform as advertised” and cannot be safely parked.

Making matters worse, the suit says FCA has left Chrysler Pacifica drivers with no available remedy for their allegedly defective and dangerous vehicles.

According to the recall notice sent to drivers, FCA specified that certain plug-in hybrid electric vehicles (PHEVs) may “experience a fire potentially originating in the center of the vehicle underbody with the ignition in the ‘OFF’ mode.” The notice further stated a remedy was “under development” and assured drivers that they would be notified when a fix was available.

The lawsuit claims the February 2022 recall has ultimately left Chrysler Pacifica drivers with vehicles that are “nearly useless” and pose a significant safety risk. According to the suit, the recall is insufficient to address the harm owners and lessees have experienced, especially since FCA has “done little more” than warn drivers not to use their vehicles as advertised.

According to the suit, this isn’t the first time Chrysler Pacifica PHEVs have been recalled for a fire-related problem. A 2020 recall involved more than 27,000 2017-2020 Pacifica PHEVs whose 12-volt batteries had a poor electrical connection that could cause a fire. According to the complaint, a remedy for the issue, which involved installing a gasket under the 12-volt isolator, was available six months after the 2020 recall was first issued. Nevertheless, vehicles subject to both recalls are “still at a heightened risk of fire with no known root cause,” the case alleges.

The lawsuit claims that because of the apparent fire risk and FCA’s warnings that drivers should not charge their vehicles or park near buildings, 2017-2018 Chrysler Pacifica PHEVs have failed to perform as advertised, especially with regard to the vehicles’ safety features.

According to the case, FCA’s advertisements for the 2017 and 2018 Chrysler Pacifica models placed special emphasis on the minivans’ safety features and family utility, not to mention the vehicles’ ability to be plugged in for charging. Though Chrysler Pacifica drivers expected that the minivans would live up to FCA’s representations—and “reasonably assumed” that the vehicles could be parked “like any other car”—the recent recall has shown these representations to be false, the lawsuit argues.

“Instead of performing as Defendant advertised, the Class Vehicles pose a significant safety risk to Class Vehicle owners and lessees, their families, other occupants in the vehicles, and surrounding property,” the complaint charges.

The plaintiff in the case says he bought his 2018 Chrysler Pacifica based on representations that the minivan would be “spacious, family friendly, and … safe.”

According to the suit, the plaintiff uses his minivan when driving his disabled son to medical appointments at hospitals, for example, and must park close to buildings and other structures to ensure that they are easily accessible to his son.

After receiving notice of the February recall, however, the plaintiff “does not feel safe” parking his Pacifica at his house and has stopped using the minivan “out of fear of immediate catastrophic injury to himself and his son.”

The proposed class action seeks to represent anyone who purchased or leased a 2017-2018 Chrysler Pacifica plug-in hybrid electric vehicle in the U.S.

There’s usually nothing you need to do to join or be considered part of a proposed class action when it’s first filed. If the case moves forward and settles, that’s when those affected, called class members, should receive notice of the settlement with instructions on how to claim their share.

In the meantime, one of the best things you can do is to stay informed. You can check back here for updates, but keep in mind that it often takes months or even years for a lawsuit to be resolved.

You can also get class action news sent straight to your inbox by signing up for ClassAction.org’s free weekly newsletter here.