A proposed class action alleges the active and dynamic fuel management systems found in certain Cadillac, Chevrolet and GMC models suffer from a defect that causes the valve lifters to malfunction and fail.

The case takes issue with the 16 active or dynamic fuel management lifters found at the top of the eight cylinders on each vehicle’s engine. These lifters, the suit says, are responsible for opening at certain times and allowing fuel to enter the engine, while at other times remaining closed to prevent some cylinders from consuming fuel when only partial engine power is needed, like when a vehicle is cruising at highway speeds. The goal of General Motors’ active fuel management (AFM) and dynamic fuel management (DFM) valve train systems is to improve overall fuel efficiency without having to reduce engine size, the case states.

The sprawling 243-page lawsuit alleges, however, that the valve train systems—essentially the mechanical parts that control the opening and closing of an engine’s intake and exhaust valves—used by defendant General Motors for a number of popular Cadillac, Chevy and GMC vehicles are defective and can cause complete engine failure, as well as pose a serious safety risk. According to the complaint, GM has been well aware of the problem yet actively concealed it, claiming that drivers are somehow responsible.

“In this way, GM has effectively and knowingly transferred the costs of repair to consumers, despite the promises of its express warranties,” the lawsuit charges.

[Be sure to scroll down to see which Cadillac, Chevy and GMC vehicles the suit says are affected by the defect.] 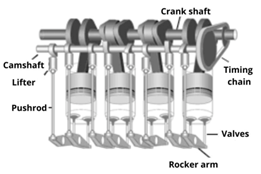 More specifically, the complaint claims the valve train systems fail because the lifters and their locking pins do not conform to design specifications, are made from “sub-standard” materials and are installed in an incorrect position in the lifter guide. Moreover, the valve lifters were not properly designed given the expansion and contraction rates of the lifters and engine block were not taken into account, the case alleges.

Further still, the lawsuit says the bores in which the lifters are inserted are not wide enough to allow the lifters to move freely, which can damage the components. General Motors is also alleged to have failed to account for the amount of increased pressure that the AFM lifters are exposed to by the pressurized oil they use to operate, causing the parts to fail prematurely, according to the suit.

[Be sure to scroll down to see which drivers might be covered by the class action lawsuit.]

According to the suit, all of these factors can cause the valve train components to fail, forcing costly repairs on consumers who may not have bought or leased their Cadillac, Chevy or GMC, or who would have paid way less for it, had they known of the headaches that lay ahead:

GM’s failure to disclose the Valve Train Defect at the time of purchase is material because no reasonable consumer expects to spend thousands of dollars to repair or replace damaged vehicle components that the manufacturer knows will fail well before the expected useful life of the component and knows will also damage other components or destroy the engine entirely.”

What happens when the alleged defect pops up? Is there a noise?

The lawsuit claims that when the valve train components begin to fail, including the lifters, rocker arms and valve springs (more on these below), the vehicle can lose power while it’s being driven. The car might also hesitate, and its engine could misfire, stall, shudder, stutter or surge, according to the complaint.

Per the suit, a common symptom of an issue with the valve train system is a ticking noise coming from the engine compartment, as well as other abnormal sounds, including chirps, squeals and squeaks.

The lawsuit stresses that the valve train system defect presents a significant safety risk (along with a costly repair bill) as failure of the engine could put drivers and passengers in a dangerous situation:

Losing power while driving, especially at highway speeds or while trying to merge or change lanes, hesitation, surging, stalling, as well as full engine failure, all significantly increase the risk of vehicle collision. Stalled vehicles or those with engine failure can also leave their occupants stranded in dangerous situations, including on the side of busy highways or roads.”

If and when a valve train system issue manifests during the vehicle’s warranty period, GM dealerships will replace the parts that have failed with equally defective components, the lawsuit alleges. The suit also claims that the repairs done by GM dealers are “often incomplete,” as the lifters are not totally replaced and other engine components possibly damaged by the defect are left in place.

As a result, the valve train system defect may well manifest again, this time outside the vehicle’s warranty period, leaving drivers to foot the bill for repair costs, the complaint alleges.

“Further, this ongoing damage to the engine eventually and inevitably leads to Class Vehicles requiring full engine replacements, well before the expected lifespan of the engine has elapsed,” the suit says.

As the suit tells it, it’s not only the lifters that suffer from defects in design, manufacture and/or workmanship. According to the complaint, other components, namely the valve springs and rocker arms, which, respectively, return the valves to their closed position and act as a lever to open and close the valves, are also faulty and have “high rates of premature failure.”

The suit contends, more specifically, that the valve springs and rocker arms at issue fail earlier than they should because they do not conform to design specifications and/or are made from “sub-standard materials.”

Further still, the case alleges the engine control module, the “brain” of the vehicle that controls the valve train system, is programmed incorrectly, which leads to mistimed valve train events that damage system components and add to the problem in general.

Which vehicles does the case say suffer from the defect?

The cars the lawsuit alleges are stricken by the valve train system problems include, but might not be limited to:

According to the case, the affected vehicles are equipped with either a 5.3L, 6.0L or 6.2L V8 engine.

The case looks to cover all persons and entities in the United States who bought or leased a model year 2014 to present General Motors vehicle, including any of the Cadillac, Chevy or GMC models listed on this page, with a 5.3L, 6.0L or 6.2L V8 engine.

I used to or currently own/lease one of these cars. What do I do now?

In general, there’s nothing you need to do to join or make sure you’re included in a lawsuit—it’ll only be if and when a case settles that “class members,” i.e., those covered by the suit, will have to act. This usually entails filing a claim form online or by mail.

It’s important to remember that class action lawsuits generally take time to work their way through the legal process, usually on the way toward a settlement, dismissal or arbitration outside of court. While the litigation rolls on, sign up for ClassAction.org’s free weekly newsletter to stay on top of things.