A proposed class action alleges Apple’s iPad Mini 6 suffers from a defect that can cause the device’s LCD display to glitch and create a so-called “jelly scrolling” effect.

The 45-page lawsuit claims, more specifically, that the pricey, redesigned Apple tablet is prone to “screen tearing,” which can cause images or text on one side of the screen to appear tilted downward, due to “incongruity in refresh rates.” The suit says that this phenomenon causes one side of the iPad Mini 6 screen to look as though it’s responding faster than the other side, producing the “visual disturbance” referred to as “jelly scrolling.”

According to the complaint, the “jelly scrolling” defect is bad enough to hinder the device’s core functionality and render it unusable given text and images appear bent, warped, blurred and/or obscured. Some users, the lawsuit relays, have even reported “motion sickness, nausea, vomiting, and migraines” as a result of their encounters with the “jelly scrolling” issue.

The case posits that the defect is a product of Apple’s decision to design the iPad Mini 6 with a larger edge-to-edge screen, which made it necessary to shift around certain internal and external components. 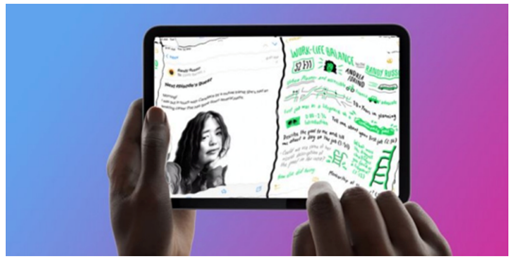 Although Apple publicly acknowledged the jelly scrolling problem to “niche tech publications” a mere four days after the iPad Mini 6’s September 2021 release, the tech giant has nevertheless continued to sell the tablet while refusing to fix the issue, change its marketing materials or disclose the problem to consumers, the complaint states. iPad Mini users have been relegated to a “weird state of helplessness” as there appears to be neither hardware nor software support on the horizon, the case says, citing ScreenRant writer Nadeem Sarwar.

“Instead, Apple has insisted, against the weight of evidence, that the Defect is normal,” the suit reads, noting that the company has been inundated with users’ negative reviews of the product.

Position of iPad Mini 6 controller board is to blame, suit says

As the lawsuit tells it, an “onslaught” of negative reviews prompted engineers working with tech journal iFixit to do a total “teardown” of the iPad Mini 6 to investigate the source of the “jelly scrolling” problem. The suit states the engineers discovered that the iPad Mini’s controller board (highlighted below) is vertically oriented on the left-hand side of the device. MacRumors.com states that this orientation causes the iPad Mini screen to refresh in a “wave-like pattern” from one side to another, rather than all at once.

In contrast, the suit says, the controller board for the iPad Air, which thus far has not exhibited the “jelly scrolling” issue, can be found at the top of the device: The iFixit engineer who did the “teardown” explained that when a user scrolls parallel to the direction that the display is refreshing, the effect of the refresh is “less noticeable because it’s not splitting the text,” the lawsuit provides. Due to the location of the control board, however, the display on the iPad Mini 6 refreshes horizontally when the device is held in a vertical position (i.e., the typical position in which a user holds the tablet to scroll), the suit says.

iFixit suggest that the jelly scrolling effect occurs when the tablet’s orientation doesn’t match the placement of the controller board, because the line-by-line refresh also happens relative to that board’s orientation.”

Although Apple touted that the iPad Mini was capable of being used by pilots in a cockpit, emergency room doctors and designers, the “jelly scrolling” defect renders the tablet unable to handle the pro apps it was advertised to run, the lawsuit says.

Apple’s statements in this regard created a context in the minds of reasonable consumers about the iPad Mini and served to assure such consumers that if the iPad Mini can serve these functions that are critical to society, that the iPad Mini can also be used for less critical functions such as unimpeded e-reading, movie watching, and game playing. In fact, as demonstrated below, Apple acknowledges in its marketing material that the iPad can perform these latter functions. However, as discussed throughout, this has not been the case for consumers.”

Who does the iPad Mini 6 class action cover?

The lawsuit looks to represent all consumers in the United States who bought, other than for resale, a sixth-generation iPad Mini.

I have one of these iPads. Can you add me to the suit?

It’s a common misconception, but when a class action is initially filed, there’s generally nothing a person needs to do to “join,” be “added to” or ensure that they’re “covered” by the lawsuit. Really, it’s only if and when a class action settles that the people “covered” by the suit, called “class members,” need to act. This usually involves filing a claim form online or by mail.

But we’re getting ahead of ourselves. Class action lawsuits generally tend to take some time to work through the legal process, usually en route to a settlement, dismissal or arbitration outside of court.

If you own an iPad Mini 6, or just want to stay in the loop on class action lawsuit and settlement news, sign up for ClassAction.org’s free weekly newsletter.