Nine9 faces a class action that alleges the modeling and acting agency has illegally sent unsolicited text messages to thousands of consumers.

The company that does business as Nine9 faces a proposed class action that alleges the modeling and acting agency has illegally sent unsolicited text messages to thousands of consumers.

The 12-page suit claims defendant Coralreef Products, Inc. has violated the federal Telephone Consumer Protection Act, in particular by sending automated telemarketing text messages to consumers without obtaining prior express consent to do so.

The plaintiff, a Philadelphia County, Pennsylvania resident, claims to have received the following text messages from Nine9, in which an agent promoted the company’s services and advertised professional headshots. Per the case, the plaintiff informed Nine9 on more than one occasion that he was not interested in the company’s products or services: 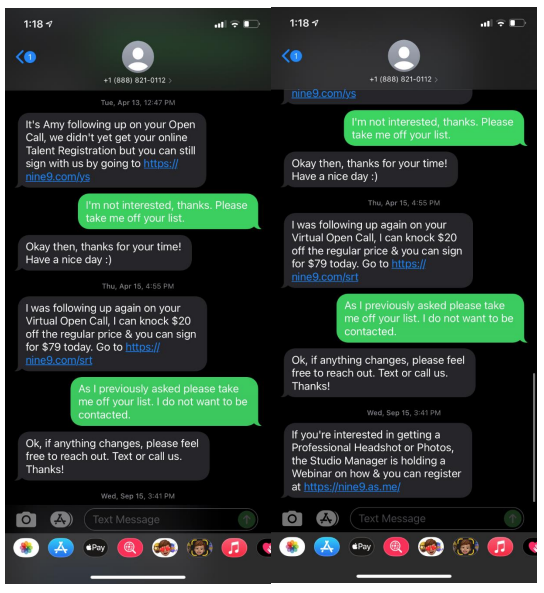 The lawsuit contends that Nine9’s text messages constitute telemarketing in that they encourage the future purchase or investment in property, goods or services. According to the suit, the talent agency does not have a written policy for maintaining an internal do-not-call list as the law requires.

The plaintiff did not provide Nine9 with his express written consent to be contacted, the case says, arguing that to the extent the agency had the plaintiff’s consent to contact him for promotional purposes, such permission was revoked when the plaintiff demanded the text messages stop.

According to the complaint, the plaintiff seeks up to $1,500 in damages for each text placed in violation of the TCPA.