A proposed class action lawsuit recently removed to federal court in Georgia details one consumer’s allegations that defendant Kenny McElwaney, who does business as Maximum Booting Co., has unlawfully collected thousands of dollars in vehicle booting fees. The plaintiff, a Florida resident, claims the defendant has accomplished this through a “systematic process” of booting cars without first complying with Union City ordinances that require certain signage be posted at any location where vehicle immobilization occurs.

Per the named plaintiff, the complaint says he was parked in a Walmart parking lot when the defendant placed a boot on his vehicle removable only in the event the man paid a $500 fine. The lawsuit includes the following image of the signage reportedly present in Walmart’s parking lot: 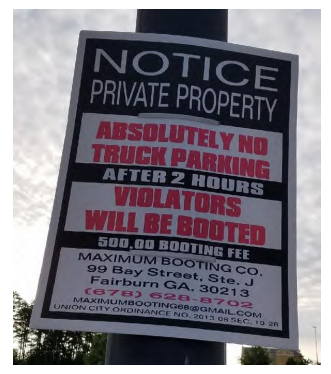 Such signage does not comply with the Union City Code of Ordinance, the case claims, in that the sign:

The complaint below is the second amended complaint filed in the litigation, and now includes Walmart Inc. and Bright Meyers Union City Associates, L.P. as defendants.