Constitution of the United States of America

A Whidbey Island, Washington property owner has filed a proposed class action over what he describes as an eardrum- and property value-harming level of aircraft noise stemming from increased Navy flight operations at nearby Ault Field at Naval Air Station Whidbey Island (NASWI) and the Naval Outlying Landing Field Coupeville (NOLF Coupeville). 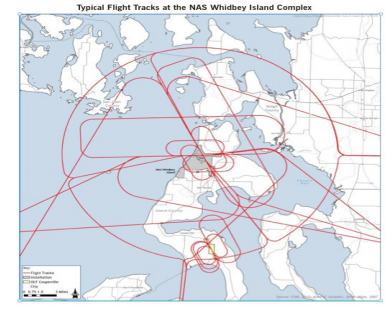 The 17-page lawsuit, filed against the United States in the Court of Federal Claims, alleges the noise levels created by the EA-I8G “Growler” fighter jets that take off and land at NASWI and NOLF Coupeville exceed 150 decibels, well above the minimum 75-decibel noise level identified by the National Academy of Sciences Committee on Hearing, Bioacoustics, and Biomechanics as the lowest threshold at which hearing loss can occur.

According to the plaintiff, the use, enjoyment and overall values of his and thousands of other properties have been harmed, “if not destroyed,” by both the uptick in Growler flight operations around and directly over proposed class members’ properties and times of day at which the Navy has chosen to conduct touch-and-go practices and changes in flight patterns.

“The flights occur in the afternoons and evening, and night flights occur several times per week and continue into early mornings,” the lawsuit relays.

The plaintiff, who owns property in Oak Harbor adjacent to Dugualla Bay, less than three miles east of NASWI, has, on “many occasions,” endured Navy aircraft carrier landing flights that began “as late as 9 pm and continued until 2 am,” the complaint says.

The lawsuit explains that NASWI sits on two pieces of land near Whidbey Island’s City of Oak Harbor and Town of Coupeville, whose combined population sat around 73,000 as of 2017. Per the suit, the main portion of the NASWI base, a busy, multi-mission 24-hour-per-day facility known as Ault Field, is located in Oak Harbor. Ault Field supports the MH-60S Seahawk helicopter, Boeing EA-18G Growler, P-3C Orion, P-8 Poseidon and EP-3E Spiral 3.2.5 Merlin fixed-wing aircraft, among other machines, the lawsuit says, noting that the Navy’s use of Whidbey Island has “varied dramatically” between 1967 and the present.

Ault Field and NOLF Coupeville serve as Navy field carrier landing practice (FCLP) sites for carrier-based jets like the EA-18G Growler, the case goes on. For FCLP training, each aircraft in turn approaches the runway and touches down before quickly taking off again without coming to a stop, a maneuver otherwise known as a “touch-and-go” landing, the lawsuit says. Per the suit, the aircraft will then loop around and prepare for another landing, performing this sequence multiple times before stopping to refuel.

In order for a Navy pilot to take off again after touching down on a landing strip, however, they need to apply full power to the aircraft, which often requires the use of afterburners, the lawsuit says. It’s this procedure that the plaintiff pegs as the source of the excess noise described in the complaint. During takeoff and landing at Ault Field and NOLF Coupeville, amid FCLP or otherwise, a jet aircraft will fly at a low altitude over the many private properties surrounding the landing strip, the lawsuit says.

In the wake of the Vietnam War, the Navy began flying the EA-6B Prowler over Whidbey Island and, after a brief lull, began once again practicing touch-and-go landings at Ault Field and NOLF Coupeville, the case says. What followed, according to the suit, was litigation that yielded compensation to Whidbey Island property owners and an agreement by the Navy to limit operations to aircraft with a noise level comparable to or lower than the Prowler, as well as fly fewer flights each year. The complaint also mentions the Navy, until recently, limited FCLP training flights since the 1990s to weekdays and not after 10:30 p.m.

The lawsuit highlights, though, that the January 2009 replacement of the EA-6B Prowler with the EA-18G Growler, an aircraft with two engines capable of producing 14,000 pounds of thrust each and 22,000 pounds of thrust with an afterburner, has sparked a rise in the number of flights and operations at Ault Field and NOLF Coupeville.

“By comparison, the outgoing Prowlers only produced 10,400 pounds of thrust from each one of its two turbojet engines,” the case relays.

After revving up flight operations over Whidbey Island around 2012-2013, the Navy, on June 25, 2018, announced it was relocating another 36 Growlers and additional supporting personnel to Ault Field, the lawsuit continues. The case claims the Navy then announced on March 8, 2019 its decision to centralize and expand Growler operations despite possessing awareness of the harmful effect such would have on the Central Whidbey Island Historic District.

All told, the Navy will add not only 36 Growler aircraft to NASWI but ramp up the number of operations from 84,700 to 112,100 annually, and increase overall FCLP operations from 17,400 to 29,600, the lawsuit says. Prior to 2016, there were roughly 64,300 Growler operations at Ault Field, the suit relays, noting that the actual manner in which the aircraft’s operations are conducted is significantly different from prior operations that caused high day-night average sound levels in the area. 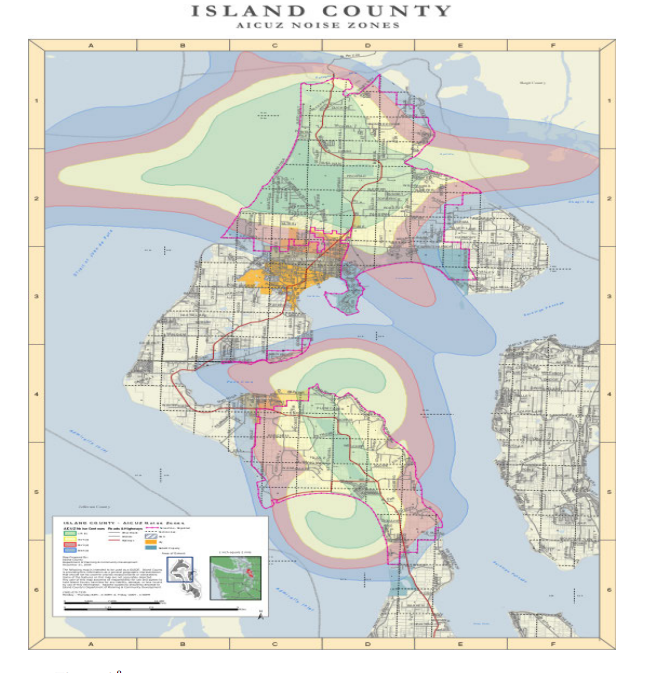 “The Navy’s website states that ‘flying can occur any day of the week depending on mission needs’ and on weekends if ‘dictated by mission needs,’” the suit reads. “The Navy admits it cannot predict how bad the impact of increased Growler and other aircraft operations on Island residents will be as the number of Growler and other aircraft at NASWI continues to steadily increase.”

As the lawsuit tells it, the United States, with the passage of the Noise Control Act of 1972 and the Department of Defense’s Air Installation Compatible Use Zone (AICUZ) program, has determined that properties located with a 65-decibel noise zone and greater are “unsuitable for residential use and development.” The AICUZ, the suit explains, is a program initiated by the Department of Defense as a means to protect public health, safety and welfare, and to prevent encroachment on military installations. One aspect of the program is to prepare noise studies to define noise exposure contours from sound emanating from military activities, the case says.

The lawsuit looks to represent all owners of residential properties located in the noise contour zone equal or greater than 65 dB day-night average sound levels as identified in the AICUZ’s Island County noise contour report displayed above.