A proposed class action lawsuit claims Vineyard Vines outlet stores are misleading shoppers into believing merchandise previously sold in retail stores is being offered at deep discounts due to illusory “suggested retail” prices. The suit out of New York’s Eastern District alleges that the defendant’s outlet store items have never actually been sold in Vineyard Vines retail stores and that the products are of a lesser quality and not sold at any discount.

“However, reasonable consumers get the impression the outlet products are identical to the retail products due to the numerous intentional similarities and representations between the products sold at each store,” the 19-page suit reads.

According to the lawsuit, Vineyard Vines operates 70 retail stores and 19 outlet stores at which it sells “high end yet wearable mainstream preppy clothing and accessories.” Signage in the outlet stores, as well as their design and features, leads customers to believe that the locations are stocked with merchandise that was previously for sale at retail stores and is of equivalent quality, the case says. Adding to the alleged illusion are the price tags on outlet store clothing and accessories that contain both a “Suggested Retail” price and a 25-percent lower “Our Price” at which the products are actually sold, the lawsuit states.

“The invented price disparity between the ‘Suggested Retail’ price, $89.50, and the actual ‘Our Price’ of $69.99, induces customers to purchase the outlet products, by creating an impression of savings and ‘enhances subjects’ perceived value and willingness to buy the product,’” the complaint reads.

In reality, the lawsuit alleges, Vineyard Vines outlet store products are of “distinctly lower quality” than retail products, as evidenced by their care tags (pictured below). 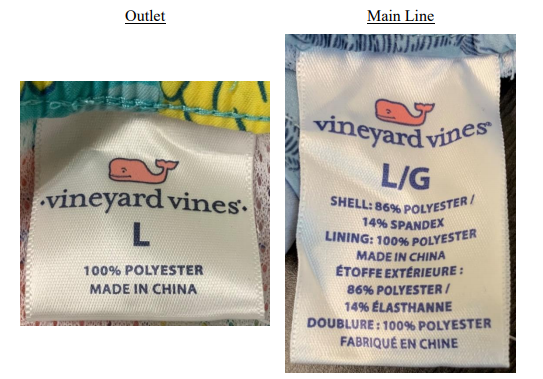 The case argues that the outlet store bathing suit, which is made of 100 percent polyester, is worth even less than its discounted $69.00 “Our Price” but can be sold for that much by the defendant based on customers’ false impression that they are receiving a discounted retail item of the same quality.

“In other words,” the complaint states, “consumers are more likely to purchase the Products because the original price, $89.95, was above the selling price, $69.99.”

The lawsuit argues that Vineyard Vines customers would not have purchased the defendants’ outlet store items if not for the allegedly false reference pricing and “illusory price discounts.”